Update Required To play the media you will need to either update your browser to a recent version or update your Flash plugin.
By VOA
12 July, 2015


China's stock markets have lost nearly $3 trillion from their peak in June. As a result, the government has introduced new measures hoping to stop weeks of declining prices.

In an effort to avoid further losses, hundreds of companies listed on China's stock exchanges filed papers to suspend trading. By Thursday, the stocks of more than 1,400 mainland companies had been suspended. That is about 40 percent of the market. 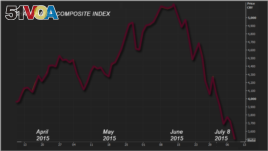 China's Securities Regulatory Commission blamed the losses partly on a "panic sentiment" and "irrational selling." Chinese state media have blamed short-sellers, traders who profit from falling prices, people spreading rumors and foreign investors. The government then put in place a number of measures to calm the stock markets.

How Chinese stocks rose in 2014

China's stock markets rose in late 2014 after the central bank cut interest rates for the first time in more than two years. A new trading link between the Shanghai and Hong Kong stock exchanges added to increased market activity. Higher "margin trading," in which investors do not have to deposit the full cost of their stock trades in order to buy the shares, also fueled gains.

In the twelve months before June 12 of this year, the total value of stocks traded on the Chinese market increased by more than 150 percent.

But as the market peaked in early June, the government tightened rules on margin trading. Investors then began to sell their holdings to protect their profits.

He said China's markets are not fully integrated into the world financial system. Mr. Lew says Chinese officials have a strong commitment to market reforms where they have clearly set out a plan. He said the speed at which the reforms are put in place remains a question.

"The question isn't their commitment to the goal. The question is the pace at which they implement it and do they do it fast enough for it to be effective. I hope this is not something that slows down the pace of reform...They've got a set of policies that they've outlined which, if they implement them, I think will make China's economy much stronger in the future."

Mr. Lew said China is moving from a centralized, industrial economy to a more market-based economy powered by consumer spending. This, he said, would lead to slower more sustainable growth and improve the lives of the Chinese people while lifting the world economy. He warned of slowing the reform process.

"If the reaction is to put the brakes on reforms, that will slow that process."

Investors welcomed the government actions to stop the decline. On Friday, Chinese stock markets regained some of the losses from the past few weeks.

However, stocks from many Chinese companies are still suspended from trading. Other investors believe prices may fall again once the suspended shares resume trading.

In a report on Friday, Bank of America wrote that the stock market crash would hit the Chinese economy in time and "will likely hurt consumption down the road."

peak – v. to reach its highest point; to reach the top

rumor(s) –n. stories about others passed between people which may not be true, but are spread anyway

abundant – adj. having a large supply of something

deposit – n. money placed in a bank or held with a financial institution like a brokerage

integrated –adj. integrate –v. to bring different things or people together into a group that works together

implement –v. to put a plan into action; to put something into place

consumer –n. a person who buys and uses products in an economy