Puerto Rico: The Other Debt Crisis

Update Required To play the media you will need to either update your browser to a recent version or update your Flash plugin.
By VOA
16 July, 2015


American investors are wondering what effect the situation in Greece will have on the United States and its economy. But some observers say the investors should be more worried about the debt problems in a U.S. territory -- the island of Puerto Rico.

Alejandro Garcia Padilla is the governor of Puerto Rico. Last month, he said the territory could not pay its $72 billion public debt. This amount includes money owed by the central government, cities and publicly-owned businesses, like power companies.

Puerto Rico is the third-largest issuer of state and local debt in the United States. Only California and New York have more debt. 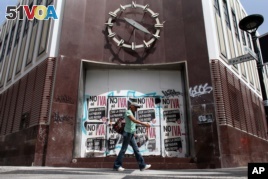 A woman walks in front of a closed bank in the neighborhood of Rio Piedras in San Juan, Puerto Rico, June 29, 2015.

Much of the island's debt is held by individual American investors. They got possession of it through ownership of shares in mutual funds and other investments.

Some observers say the U.S. economy could be hurt if Puerto Rico is not able to pay its debts. They believe the island may be unable to make its required debt payments. If that happens, investors could ask a court to force the territory to make the payments.

Puerto Rico's debt problem has not received as much attention as the economic crisis in Greece. That is partly because the territory's problems are not new. Puerto Rico has been in an economic recession since 2005. That was when the U.S. Congress made changes to a tax program that had given businesses financial aid for moving to the island. In the years since the program was changed, the territory has had to borrow money to pay its debts.

Pedro Pierluisi serves as Puerto Rico's Resident Commissioner in the U.S. House of Representatives. He wrote about the economic problems last week in The New York Times newspaper. He said that, on the island, "the unemployment rate, poverty rate and median household income have always been far worse than any state's. The main cause is inequality."

He also said Puerto Rico does not have much power in Congress because it is only a territory. Although Puerto Ricans are U.S. citizens, they do not have the right to vote in presidential elections or elect someone to the Senate. The territory sends a delegate to the House, but she or he cannot vote on legislation, except during committee meetings.

Mr. Pierluisi has proposed legislation that would permit Puerto Rico to declare bankruptcy. American cities can ask for a court's approval to cancel debts, but territories cannot.

issuer – n. someone or something that develops, registers and sells financial instruments for the purpose of financing its operations

mutual fund – n. an investment program that trades in shares of stock or other investments

bankruptcy – n. a legal term for being unable to repay debts to creditors

Does your country have a debt problem? We want to hear from you. Write your thoughts in the comments section.