Update Required To play the media you will need to either update your browser to a recent version or update your Flash plugin.
By VOA
05 October, 2015


The United States, Japan and 10 other countries reached agreement on a huge trade deal Monday. The deal will lower trading barriers and set commercial rules for 40 percent of the world economy.

The Trans-Pacific Partnership agreement was reached in the U.S. city of Atlanta, Georgia, after seven years of negotiations.

For the deal to take effect, it must be approved by national legislatures in all 12 countries. In addition to the U.S. and Japan, the countries include Australia, Brunei, Canada, Chile, Malaysia, Mexico, New Zealand, Peru, Singapore and Vietnam.

It is not clear whether the U.S. Congress will support the trade deal. But the completion of the agreements marks a major victory for President Barack Obama. He said the TPP deal "reflects America's values and gives our workers the fair shot at success they deserve."

Economic observers see the deal as an agreement that could balance the growth and influence of China. 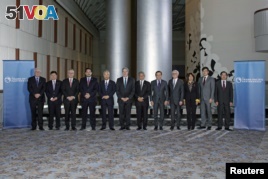 Japanese Prime Minister Shinzo Abe praised the agreement. He called it, "a farsighted policy for all participating countries that share the values and try to build a free and fair economic zone."

President Obama campaigned for the trade deal over the opposition of most Democratic Party lawmakers. Opponents of the deal say it will cost thousands of U.S. workers their jobs. They say the deal will lead manufacturers to move their operations to other countries where workers are paid less.

Congressional Republicans, however, have generally supported completion of the trade pact.

In the United States, the 2016 presidential election could affect congressional approval of the deal. A congressional vote might be delayed until a new president takes office, in early 2017.

Negotiators in Atlanta met for five days of talks to complete the deal. The group reached final compromises on the issues of intellectual property protection for new biologic drugs, car manufacturing rules, and dairy product trading.

reflect – v. to show the image of something; to make known

deserve – v. to be worthy of something

participating – adj. being involved with others in doing something

dairy – adj. related to the production of milk or milk products