War in Gaza Also Waged on the Internet

Update Required To play the media you will need to either update your browser to a recent version or update your Flash plugin.
By VOA
17 August, 2014
51VOA听写整理，转载请注明出处。文本已经校对，欢迎纠错！

The war in the Gaza Strip is being fought as much on the Internet as it is on the ground. Some people say the increased use of social media is changing the way people look at the conflict.

Palestinian activists recently put a video on the YouTube website. The video shows rescue workers trying to help a Palestinian boy look for his family. Suddenly, the boy is seen lying on the ground. The video claims he was shot by Israeli gunmen. A second bullet appears to kill him. The video is now being shared on social media. VOA could not independently confirm whether the video came from a pro-Palestinian group called the International Solidarity Movement. 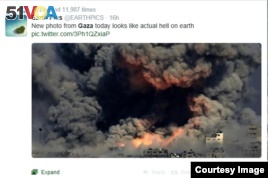 The war on the ground has quickly become an online battlefield on various social media platforms. This image taken from Twitter on July 30, 2014.

The current fighting in Gaza is not the first time the Palestinian people have seen war. But this is the first time Palestinians get to tell their stories to the world as the direct source of information. Lisa Goldman is with the New America Foundation, a non-profit group. She spoke to VOA on Skype.

"Before, there were a lot of Israelis on Twitter. Now there are a lot of Palestinians on Twitter, and this is new; this is really new. It's something that happened in the last year," Lisa said.

Yousef Munayyer heads the Jerusalem Fund, a pro-Palestinian group. He says that earlier news reports about the Middle East were generally pro-Israel. But he says active social media work by the Palestinians is changing how traditional media report the news.

"Because the mainstream is trying to put out what they believe is the truth, but when you have this marketplace of information that is showing different ideas, different images, different realities, they too have to then adjust their coverage to become closer to that democratized sort of space of information."

Jed Shein is the social media director at Israel's embassy in Washington. He warns against thinking that social media truly show how the public feels about issues.

"The people willing to comment and react on social media are the people that maybe are on the broader ends of each spectrum."

Use of social media to spread the news is not limited to the Palestinian territories. The Islamic group ISIL has also used the Internet to spread its message to the world. Recently, Syria blocked Internet access for two hours across the entire country. Some people believe the Syrian action was an effort to stop ISIL from using social media networks.

Social media websites like YouTube and Facebook remain popular. But experts say there is little scientific evidence to prove how effective they are in the Gaza conflict. Lisa Goldman notes the importance of having news media employees report from conflict areas.

"People like Ayman Mohyeldin from NBC News in the States, people like Sherine Tadros for Sky News, Ben Wedeman from CNN. These are Arabic speakers, people who've been in the Middle East for a long time and who know Gaza very well," Lisa said.