Update Required To play the media you will need to either update your browser to a recent version or update your Flash plugin.
By Phil Dierking
27 November, 2016

The satellite was launched from Cape Canaveral, in the state of Florida, on November 19. It will be in orbit some 36,000 kilometers above Earth's surface. 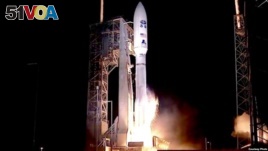 The GOES-R weather satellite at its launch

NOAA officials are calling the new satellite GOES-R. That is short for a much longer name -- the Geostationary Operational Environmental Satellite – R Series.

NOAA said GOES-R could improve the nation's ability to observe weather conditions and make weather predictions. It said the satellite's deployment would lead to more exact and timely weather forecasts, watches and warnings.

The government agency said the satellite will require testing of its six instruments and will be ready to work "within a year."

Next generation of weather satellites

"The next generation of weather satellites is finally here," said NOAA Administrator Kathryn Sullivan. She described GOES-R as one of the most sophisticated Earth-observing machines ever created.

Sullivan said its instruments will be able to study Earth five times faster and with four times more detail than any other NOAA satellite currently in operation. She believes this will make the United States an even stronger, more "Weather-Ready" nation.

A NOAA statement said the greater detail will help improve the agency's study of ocean storms, as well as "the prediction and warnings of severe weather." In addition, GOES-R will be able to provide improved rainfall estimates, which will lead to more timely and detailed flood warnings.

The statement also said that GOES-R will give better estimates of wind strength, as well as better measurement of fog, ice or lightning strikes.

One of the six instruments on the satellite is designed to help scientists study lightning strikes and map them. This, NOAA says, will help the agency follow the movement of severe storms and provide more detailed warnings.

Craig Fugate serves as administrator of the Federal Emergency Management Agency. He says that the GOES-R satellite will improve the ability of people and organizations across America to prepare for, and react to, weather-related disasters.

Fugate feels that better understanding of the world around us will lead to better results. These include knowing where to best position supplies before a storm hits and providing more targeted information to local officials. That information could help the officials decide when to order civilians to leave an area because of bad weather.

In addition to weather forecasting, GOES-R will be part of an international search and rescue network. It will have a "special transponder" that will be able to find signals from emergency beacons.

This story first appeared on VOANews.com. Phil Dierking adapted the report for Learning English. George Grow was the editor.

How could better weather forecast help you? We want to hear from you. Write to us in the Comments Section or on 51VOA.COM.

forecast – n. to say that (something) will happen in the future

geostationary – adj. moving in orbit in space along the equator, so that it remains stationary to a fixed point on the surface

transponder – n. a device that receives a radio signal and sends out a signal in response and that is used especially to show the location of something