What's Next for DC's Eagle Pair, Liberty and Justice?

Update Required To play the media you will need to either update your browser to a recent version or update your Flash plugin.
By Ashley Thompson
01 March, 2019

Much of the talk in Washington this week has centered on what Michael Cohen, President Donald Trump's former personal lawyer, told lawmakers during his appearance before Congress.

But lots of Washingtonians are talking about something else, too. 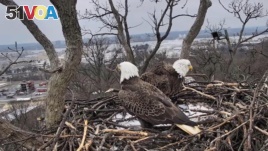 Bald eagles Justice (left) and Liberty are seen together for the first time in almost three weeks.

It involves liberty and justice for all.

Actually, just Liberty and Justice. Those are the names of two bald eagles who have called America's capital home for many years.

The pair have a nest in southwest D.C. The group Earth Conservation Corps put up video cameras near their nest. This so-called "Eagle Cam" is a hit on the internet.

Liberty and Justice have been together for an estimated 14 years. During that time, Liberty, the female, has laid more than 20 eggs. She and Justice have taken turns keeping the eggs warm until they open.

But last month, Justice disappeared. You might say he "flew the coop." This means to leave one's longtime home.

Justice went missing on February 9. His absence left Liberty to catch her own fish from the nearby river, keep her eggs warm by herself and fight off interested male eagles.

Several male birds made appearances on Eagle Cam over the next couple of weeks. The cast of characters even received names from Earth Conservation Corps employees and Eagle Cam watchers. There was Aaron Burrd, whose name is a play on America's third vice president, Aaron Burr. He was not at all successful in gaining Liberty's approval.

A male eagle named M2 had better luck. In fact, he was seen earlier this week helping Liberty keep her eggs warm. Later, the two were seen, well, being lovebirds. Liberty even left her nest for a long period of time, leaving her eggs unviable. In other words, they will not produce baby eagles.

Then on Wednesday, Justice suddenly returned. It was a shocking turn of events. As one Eagle Cam fan wrote, "This is better than watching soap operas."

Even though Justice is back, no one is saying "the eagle has landed" just yet. This expression is used to describe a successful arrival or completion of a mission. If Justice wants to get Liberty back from M2, he will have to work for it.

It was not until Friday morning that Justice and Liberty were both seen at the nest together. As Liberty was enjoying some fresh-caught fish, Justice flew in from behind.

It was a tense few moments. Justice hung his head away from Liberty. He then slowly and carefully walked toward her. He could be heard making high-pitched noises.

But Liberty continued to ignore her longtime partner, turning her head away from him.

Then, Justice decided to try to get himself a piece of Liberty's fish. That was a bad idea.

Liberty reacted in an aggressive way and then moved closer to her meal to protect it. Moments later, she started eating her fish again. Justice began moving around some small pieces of wood, as if trying to win Liberty's favor by being helpful.

Eagle Cam watchers are now waiting to see what happens next. Although Justice is back in the bird's nest, he is clearly going to be "in the doghouse" for some time.

Ashley Thompson wrote this report, with information from the Earth Conservation Corps and DCist. Hai Do was the editor.

lovebirds - n. people who are lovers :people who have a romantic relationship

soap opera - n. a television or radio program that has continuing stories about the daily lives and problems of a group of people

in the doghouse - expression. in a bad situation because someone is angry at you : in trouble