Why Do Few Americans Know about Nutrition Guide?

Update Required To play the media you will need to either update your browser to a recent version or update your Flash plugin.
By Andrew Smith
03 December 2022


Only one in four Americans know about the most recent government effort to get people to eat a healthy diet.

That information comes from a study released Tuesday by the National Center for Health Statistics. 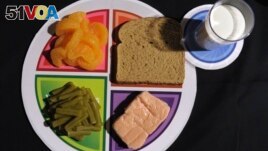 FILE - A sample plate of the food icon MyPlate from the U.S. Department of Agriculture. Few Americans know about the most recent government effort to get people to eat a healthy diet. (AP Photo/Susan Walsh, File)

MyPlate uses a dinner plate with four colored sections for fruit, vegetables, grain and protein, with a smaller circle for dairy products, such as low-fat milk or yogurt. It encourages Americans to make half of their meals fruits and vegetables.

The study also found that about 10 percent of Americans had tried to follow the guidance of MyPlate. That means the program that costs about $3 million a year has not reached a big majority of Americans. Diet-related diseases such as obesity, diabetes and heart disease have continued to rise since MyPlate was introduced.

"This is currently the primary education tool that communicates guidelines for Americans," said the study's lead writer, Edwina Wambogo. She is a nutrition expert at the health information agency. "MyPlate should be doing a little bit better."

Marion Nestle, a food policy expert, said the MyPlate program does not include an education program and does not deal with many foods Americans eat.

A USDA official said the agency's proposed 2023 budget aims to increase spending on the program from $3 million to $10 million a year. The idea is to help the MyPlate program reach more people.

The recent study said people who called their diet excellent, very good or good were more likely to have heard of MyPlate than those who said their diet was fair or poor.

Dr. Vijaya Surampudi is a nutrition specialist at the University of California, Los Angeles. She said MyPlate leaves out important details about fats and the differences between vegetables. And Nestle noted that MyPlate fails to show that vegetables, grains, and dairy foods also contain protein.

The new study advises more research into why some groups are less likely to know about and follow government guidance. It also said additional research was needed to find out how best to reach people with poor diets.

But the answer is not so simple, Surampudi suggested. People know now that they should eat more fruit and vegetables. Beyond that, the message gets less clear.

"The minute it gets a little confusing, people shut down," she said.

excellent –adj. unable to walk or move legs and arms

fair –adj. neither good nor bad