Update Required To play the media you will need to either update your browser to a recent version or update your Flash plugin.
By Andrew Smith
15 November 2022


Ayla Bashir, a 16-month-old girl from Ottowa, Canada, is healthy after doctors used a new method to treat her before she was born. She has a rare genetic disease that killed two of her sisters.

The disease, called Pompe, causes the body to fail to make some or all of an important enzyme. But a new case study describes the new treatment method that seems to be working for Ayla.

The young girl's parents recently told The Associated Press their daughter is now an active, happy girl who is growing normally. 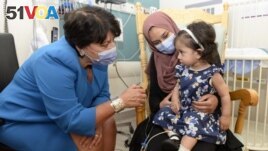 In this photo provided by the Children's Hospital of Eastern Ontario, Ayla Bashir and her mother, Sobia Qureshi, meet with Dr. Karen Fung Kee Fung, left, of the Ottawa Hospital in August 24, 2022. (Andr&#233; Coutu/CHEO via AP)

The couple previously lost two daughters, Zara, 2.5, and Sara, 8 months, to the condition. A third pregnancy was ended because of the disease, or disorder.

The future for Ayla is hopeful but uncertain.

Dr. Karen Fung-Kee-Fung is a medicine specialist who works with fetuses at The Ottawa Hospital. She gave Ayla her treatments. The new method was developed by Dr. Tippi MacKenzie, co-director of the Center for Maternal-Fetal Precision Medicine at the University of California, San Francisco.

MacKenzie shared her research with Fung-Kee-Fung. "We were all motivated to make this happen for this family," MacKenzie said.

In this case, doctors delivered important enzymes to the mother through her stomach. The enzymes were then guided into the umbilical cord. Ayla received six treatments every two weeks, starting at about 24 weeks of fetal development.

Dr. Pranesh Chakraborty has cared for Ayla's family for years. He told the AP that what made the treatment highly effective was completing it early, while the fetus was still developing.

Pompe affects fewer than 1 in 100,000 newborns. It is caused by changes in a gene that makes an enzyme that breaks down glycogen, or stored sugar, in cells. When that enzyme is reduced or removed, glycogen builds up dangerously throughout the body.

In addition, the most severely affected babies, including Ayla, have an immune condition in which their bodies block the treatment enzymes. This eventually stops the treatment from working. The hope is that Ayla's early treatment will reduce that immune response.

Babies with Pompe disease have trouble feeding and experience muscle weakness. They often have very enlarged hearts. When left untreated, most babies die from heart or breathing problems during the first year of life. In addition to the girls who died, Ayla's parents have a 13-year-old son and a five-year-old daughter. Neither of those children were affected by the disorder.

For now, doctors are waiting to see whether the treatment can become a generally accepted form of treatment. Dr. Christina Lam is a biochemical genetics specialist at the University of Washington and Seattle Children's Hospital in Seattle. She said it will take some time to clearly demonstrate whether the results of the new treatment are better for patients.

Ayla receives drugs for her immune system and weekly enzyme treatments that take five to six hours. Unless a new method is found, Ayla is likely to continue the treatments throughout her life.

Her parents say that every step of progress, such as when she started to crawl, has been very special.

"It amazes us every time," said her mother, Sobia Qureshi. "We're so blessed. We've been very, very blessed."

enzyme – n. a protein that changes or effects chemical reactions in the body

fetus – n. unborn offspring or animals or humans still in the uterus

motivate – v. to make someone or oneself encouraged or determined to do something

umbilical cord – n. the tube connecting the unborn baby to its mother, delivering food and oxygen

immune – adj. protected against something harmful such as disease by the formation of antibodies

crawl – v. to move forward on hands and knees