Update Required To play the media you will need to either update your browser to a recent version or update your Flash plugin.
By Dan Novak
25 October 2022


Children's hospitals in parts of the United States are reporting a worrying surge in respiratory syncytial virus, or RSV.

The common virus affects the breathing system, usually causing minor sickness like a runny nose and cough. But RSV infections can cause much more serious disease in babies and old people.

RSV cases dropped sharply two years ago when the pandemic led to shutdowns of most public activity. But with restrictions easing in the summer of 2021, doctors saw a concerning increase in RSV infections. The disease usually spreads in the autumn and winter seasons. 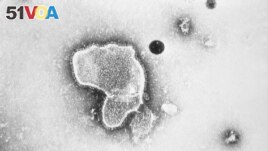 This 1981 photo provided by the Centers for Disease Control and Prevention (CDC) shows an electron micrograph of Respiratory Syncytial Virus, also known as RSV. (CDC via AP)

Doctors are preparing for the possibility that RSV, flu and COVID-19 may all surge in the coming months. Experts worry that such an event could cause greater medical demand than hospitals can meet.

"I'm calling it an emergency," said Dr. Juan Salazar of Connecticut's Children's Hospital. There, RSV has forced led the hospital to repurpose some spaces in the building as patient rooms.

Most people infected with RSV can pass the virus over a three to eight day period. But, babies and people with weakened immune systems can spread RSV for up to four weeks. There is no vaccine for it, though several candidates are in testing.

RSV can infect anyone. But it causes the most threat to babies, older adults and people with weakened immune systems. These groups are at greater risk of developing serious lung infections from RSV.

Around 58,000 Americans under the age of five require hospital treatment for RSV in a usual year. The disease also kills as many as 500 children under five in the U.S. ever year.

For babies, the struggle to breathe can interfere with eating.

Experts are suggesting several reasons for the current RSV surge.

They note that babies and children were less exposed to RSV and other common diseases during the pandemic lockdowns. Now that restrictions have ended, children face higher chances of contact with RSV.

Also, experts say immune systems might not be as prepared to fight the virus after more than two years of masking, said Dr. Elizabeth Mack. She is with the Medical University of South Carolina.

Last week, tests identified RSV infections in more than 7,000 people, said the Centers for Disease Control and Prevention (CDC). That is more than in past outbreaks.

There is no cure for RSV. Doctors may provide a steroid medicine or an inhaler to patients to ease their breathing. In serious cases, patients can require oxygen assistance, a breathing tube or a ventilator.

To prevent the spread of viruses, people should wash their hands and stay home if feeling sick.

During RSV season, an injection of an antibody-based medicine is sometimes given to protect babies at very high risk.

surge — n. to move very quickly and suddenly in a particular direction

steroid — n. a natural substance that is produced in the body

inhaler — n. a device used for inhaling a medicine

ventilator — n. a device that lets fresh air enter and move through a room, building, etc.