Update Required To play the media you will need to either update your browser to a recent version or update your Flash plugin.
By Bryan Lynn
14 November 2022

Walking the streets of the city, Zelenskyy met with soldiers and took pictures with citizens. "This is the beginning of the end of the war," he said. "We are step by step coming to all the temporarily occupied territories."

Zelenskyy added, "We are moving forward. We are ready for peace, peace for all of our country." 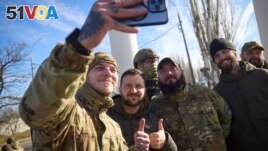 He admitted, however, that the town's recapture came at a heavy price. The fighting, he said, had taken "the best heroes of our country."

Zelenskyy thanked NATO and other allies for their support and for providing military assistance. He said the arrival of movable rocket systems from the United States had made a big difference in Ukraine's war effort.

The retaking of Kherson marks one of Ukraine's biggest successes in its war against Russia. Russian forces invaded Ukraine in February.

But large parts of eastern and southern Ukraine are still under Russian control. Even Kherson remains within reach of Russian shells and missiles. Heavy fighting was reported elsewhere in the country, with Ukraine reporting civilian deaths and injuries.

Families gathered in Kherson's main square to celebrate Russia's withdrawal. Some stood in front of the main government building, which until recently was occupied by Russian forces.

Many people carried Ukrainian flags, which had been banned in public under Russia's occupation.

Yevhen Teliezhenko lives in Kherson with his family. He told The Associated Press he did not feel safe flying his Ukrainian flag outside his home while Russia controlled the city. But on Monday, the 73-year-old and his wife drove around the city flying the flag.

The couple stopped to get Ukrainian soldiers who liberated the city to write their names on the flag. "They were fighting for us. We knew we were not alone," Teliezhenko said.

While the liberation of Kherson brought excitement and hope, the situation remains difficult. On Monday, the city had no power and water. Food and medicines were in short supply. Life is expected to be hard for weeks to come as winter arrives and energy supplies for heat are limited.

Kherson was the only provincial capital that was captured by Russia. Russia seized the city in the first weeks of the invasion. It was an important gain for Russia because the city is situated in a strategic position on the Dnieper River.

liberate – v. to help someone of something be free

provincial – adj. relating to a province: one of the large areas some countries are divided into

strategic – adj. helping to achieve a plan, usually in business of politics