Update Required To play the media you will need to either update your browser to a recent version or update your Flash plugin.
By Bryan Lynn
13 November 2022


Scientists say they have discovered the closest black hole to Earth.

Black holes are areas in space where gravity is so strong that nothing – not even light – can escape them. They are believed to be formed from collapsed stars.

An international group of astronomers recently announced the discovery of the black hole, which sits about 1,600 light years from Earth. A light year is the distance light travels in one year. In space, light moves about 9.4 trillion kilometers each year. 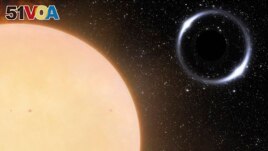 The researchers named the black hole Gaia BH1. They say it sits in the constellation of Ophiuchus. A constellation is a grouping of stars. The black hole is believed to weigh about 10 times the mass of our sun. The team said it is three times closer to Earth than the previous record-holder.

The newly discovered gravitational mass was identified by observing the motion of its orbiting star. The star orbits the black hole at about the same distance as Earth orbits the sun.

Kareem El-Badry is an astrophysicist with the Harvard-Smithsonian Center for Astrophysics and Germany's Max Planck Institute for Astronomy. He was the lead writer of a study describing the discovery in Monthly Notices of the Royal Astronomical Society.

The black hole was first identified using the European Space Agency's (ESA) Gaia spacecraft. Gaia has already discovered more than 800,000 multi-star systems. El-Badry and his team then sought to confirm the discovery through numerous additional observations over a period of four months. This effort involved six different highly sensitive telescopes across the world.

One was the 6.5-meter Magellan Baade telescope, based at the Las Campanas Observatory in Chile. The team also used an instrument on the Gemini North telescope, which is based in Hawaii.

The researchers needed such telescopes to effectively observe the orbital motion of the black hole's star. The telescope in Chile and the Gemini instrument were able to provide the astronomers with high-resolution images. The telescopes also collected sensitive data on ultraviolet and near-infrared wavelengths.

El-Badry said in a statement the Gemini observations "confirmed beyond a reasonable doubt" that the team had discovered a normal star and at least one black hole. El-Badry added that the black hole appears to be dormant, meaning not currently active.

When active, black holes give off high-energy light. While dormant, they give off nothing and are difficult to identify.

How did black hole form in our galaxy?

The scientists said it remains unclear how the black hole formed in our Milky Way galaxy. Examinations of data collected on Gaia BH1 suggests "its existence is difficult to explain" using traditional evolutionary modeling methods, said Tineke Roegiers. She is a project information specialist with the Gaia spacecraft team.

The researchers said if the black hole formed the traditional way – from the gravitational collapse of a star – that star would have been at least 20 times the mass of our sun. This means the star would have only lived a short time, maybe only a few million years.

If both stars had formed at the same time, the scientists say, the massive star would have quickly turned into a "supergiant" and swallowed the other star before it had a chance to fully develop.

These differences, Roegiers said, "may indicate something important is missing from our current knowledge of black hole formation."

El-Badry said the mystery about Earth's closest black hole presents many questions about how it formed, "as well as how many of these dormant black holes there are out there."

He added, "I have been searching for a system like Gaia BH1 for the last four years, trying all kinds of methods – but none of them worked. It has been elating to see this search finally bear fruit."

Bryan Lynn wrote this story for VOA Learning English, based on reports from the Center for Astrophysics, The Associated Press, the European Space Agency and the Max Planck Institute for Astronomy.

doubt – n. the feeling of being unsure about something

evolution – n. the way in which living things change and develop over millions of years

indicate – v. to suggest something