Update Required To play the media you will need to either update your browser to a recent version or update your Flash plugin.
By Dan Friedell
09 November 2022


Meta, the company that owns the social media service Facebook, announced Wednesday that it will cut 11,000 jobs.

Company chief Mark Zuckerberg started Facebook in 2004. In a letter to employees, he took responsibility for misjudging how the economy would change after COVID-19 restrictions ended.

"This did not play out the way I expected," Zuckerberg wrote. 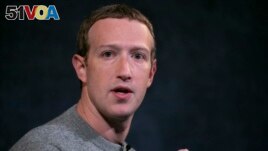 He pointed to a loss of advertising and said people used their computers and mobile phones less often after the pandemic ended. He said he made the choice to hire more people because he expected the company's profits to grow.

The price of Meta stock shares has gone down by over 70 percent in 2022. At the same time, Zuckerberg directed the company to invest $10 billion each year to create "the metaverse." Zuckerberg believes a digital universe will soon replace smart phones as the main way people use technology.

In the summer, Zuckerberg's company reported its first-ever revenue drop. It reported another drop in the autumn.

In addition, some social media companies are having trouble getting the same amount of information from their users. Last year, Apple made changes to the way its iPhones report user activity. The changes make it harder for social media companies such as Facebook, Instagram and Snapchat to send targeted advertisements to phone owners.

In addition to the job cuts, Meta said it will not hire new employees at least until the spring of 2023.

Zuckerberg said the company made changes to cut costs, but it was not enough. He called the choice to cut jobs a "hard decision."

Meta employees will soon find out if they have a job by email. If their job is cut, they will be able to use their company email to say goodbye to co-workers. They will receive at least 16 weeks of pay if they lose their jobs.

The company's stock market price rose about six percent after the news was released.

revenue –n. money that is earned by or paid to a business or organization