US House Speaker Talks about Attack on Husband

Update Required To play the media you will need to either update your browser to a recent version or update your Flash plugin.
By Dan Novak
08 November 2022


U.S. House Speaker Nancy Pelosi said Monday that last month's attack on her husband last month will affect her decision on whether to remain in Congress after the midterm election.

The midterm elections were held Tuesday.

The Democratic leader also called on Republicans to stop the misinformation that is fueling political violence. And she urged Americans to "vote to defend our democracy." 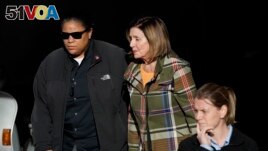 House Speaker Nancy Pelosi, middle, is escorted to a vehicle outside of her and husband Paul Pelosi's home in San Francisco, Wednesday, Nov. 2, 2022. (AP Photo/Jeff Chiu)

In an interview with CNN, Pelosi did not say what her plans would be if her party loses the House majority. But many believe Pelosi and others would step down.

Pelosi was filled with emotion when she described the attack on her 82-year-old husband and the sadness she felt for the country.

"I'm sad because of my husband, but I'm also sad for our country," Pelosi said. "I just want people to vote and we will respect the outcome of the election, and I would hope that the other side would do that as well."

Pelosi spoke about her husband for the first time publicly on the day before the midterm elections. Democrats are struggling to keep control of Congress at a time of rising threats of violence against lawmakers and concerns over the U.S. election.

Pelosi was asked whether she had made a decision about remaining in Congress. "I have to say my decision will be affected about what happened in the last week or two," Pelosi said on CNN.

Some Republicans, including the son of former president Donald Trump and even new Twitter owner Elon Musk, have made fun of the attack, despite the seriousness of it.

"There has to be some message to the Republicans to stop the disinformation," Pelosi said. "We want the country to heal."

Pelosi's husband Paul was attacked 11 days before the election by a man who broke into their home in San Francisco, California. Officials said he was looking for the speaker before hitting Paul in the head with a hammer. The attacker told police he wanted to talk to Speaker Pelosi and would "break her kneecaps" as a lesson to other Democrats. Paul Pelosi suffered a broken skull and other injuries in what officials call a planned political attack.

Pelosi said the hammer hit her husband in two places but did not enter his brain. Pelosi said he would have a long recovery.

She said the attack on her husband of nearly 60 years was fueled by misinformation "that has no place in our democracy."

Pelosi told CNN that she was "very scared" when she learned about the attack early on the morning of October 28. "I'm thinking my children, my grandchildren. I never thought it would be Paul," she said.

David DePape is being held in San Francisco jail. He pleaded not guilty to attempted murder and other charges. He also faces federal charges of attempted kidnapping of an elected official.

Officials said DePape allegedly broke into the Pelosi home, woke up Paul Pelosi, and demanded to talk to "Nancy." When Paul Pelosi told the man his wife was out of town, DePape said he would wait. After Paul Pelosi called 911, the phone number for reporting an emergency, officers arrived to see the two men struggling over a hammer. Then DePape hit Paul Pelosi at least once in the head with the hammer.

DePape later told police he wanted to kidnap the speaker. He threatened to injure her "to show other members of Congress there were consequences to actions."

Pelosi has said little since the attack on her husband. But she spoke in an online call to activists late last week after her husband was released from the hospital.

interview — n. a meeting at which people talk to each other in order to ask questions and get information:

hammer — n. a tool that has a heavy metal head attached to a handle and that is used for hitting nails or breaking things apart

allege — v. to state without definite proof that someone has done something wrong or illegal

consequence — n. something that happens as a result of a particular action or set of conditions