Update Required To play the media you will need to either update your browser to a recent version or update your Flash plugin.
By Dan Friedell
06 November 2022


The Alaska Native village of Shishmaref sits on the sinking barrier island Sarichef in the Chukchi Sea near the Bering Strait. The island lies between the United States and Russia, where it is increasingly threatened by the effects of climate change.

The village is home to about 600 members of the Inupiat People. They live simply, without running water and other modern technology.

Rising sea levels, flooding, increased erosion and loss of protective sea ice and land is a huge concern for the villagers. Some want to leave. 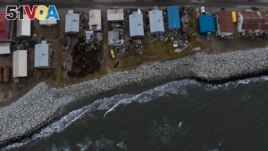 In fact, the community has voted in support of proposals to resettle elsewhere. Yet, more than six years after the last vote, Shishmaref remains in place. The planned move costs more than the village can pay.

So, the community carries on toward a troubling future.

The villagers continue their traditions. They celebrate birthdays, baptisms and school graduations. Their lives center on their homes, the local school and one of the world's northernmost Christian churches.

Aaron Silco leads the local Lutheran Church. He called the concern about the shrinking land and floods "too much of a burden" for the community. He said if the villagers think about climate change too often, it will hurt their ability to live their lives. It will take away from things such as birthday parties, funerals and sporting events.

Rich Stasenko agrees. He moved to Shishmaref in the 1970s. He calls the community "resourceful" and "resilient."

In the 30 years since 1992, the U.S. National Oceanic and Atmospheric Association says temperatures in Alaska have gone up by 1.4 degrees Celsius.

That area of the Arctic had been warming twice as fast as the rest of the world. Now it is warming three times faster.

The island already does not have much space where people can live. It is only about five kilometers long and 400 meters wide. It used to be protected by a large layer of ice that is melting. The lack of ice means more flooding and more problems from storms. The sea is reclaiming the coast. About 14 homes had to be moved inland in 2002.

There are many towns in Alaska like Shishmaref that are having problems due to warming weather. Most of the people that live in the small towns are native people who are related to the first people to live on the islands.

Lloyd Kiyutelluk is president of the local tribal council.

"I'm scared that we will have to move ..." he said. He does not want the government to say the situation is "an emergency ... but the way things are, we're getting storms that we've never seen before."

Government leaders warned that the island would have a problem during a storm in September. Officials said it could bring the worst flooding in 50 years. As the storm moved through the Bering Strait, it cut electricity, destroyed an important road and flooded a human waste treatment center.

Molly Snell, 35, talked about the storm. She said she hoped the village would not be forced to evacuate.

"The right storm, with the right wind could take out the whole island," she said. She said the island is more "vulnerable" due to climate change.

Who is to blame?

Over time, the community has changed its ways. However, the people of Shishmaref have not contributed much to climate change. Most of the greenhouse gases to blame are produced by populations in Europe and continental North America.

Elizabeth Marino calls that situation an example of "climate injustice."

Marino is an anthropologist, or an expert on humans and their communities. She studied the people of Shishmaref and wrote a book about her findings.

erosion –n. the gradual destruction of something by natural forces such as wind and water

baptism –n. a ceremony that makes a person a member of the Christian church

graduation –n. the act of receiving a diploma from a school, college or university

burden –n. something difficult to manage, accept or deal with

layer –n. a piece of material that lies on top of or below something else

council –n. a group of people who are chosen to make rules, laws or decisions about something

evacuate –v. to remove someone from a dangerous place

contribute- v. to help to cause something to happen