Update Required To play the media you will need to either update your browser to a recent version or update your Flash plugin.
By Dan Novak
05 November 2022


The famous American expert on manners, Emily Post, died in 1960. But two of Post's family members have updated her book of advice for the 21st century on the 100th anniversary of the first edition.

Etiquette is a word describing the rules for acceptable behavior among members of a society. But different societies and cultures have different rules.

"I think mostly that it's really easy to paint etiquette and manners as tools for elitism, tools for secrecy, tools for exclusion," said Lizzie Post. She is Emily's great-great-granddaughter and co-writer of the latest Emily Post's Etiquette. 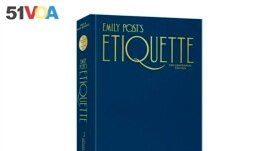 "But when we're using etiquette and manners as a tool for self-reflection and awareness of others, I think we're really going to have a chance to make the world a nicer place," she said.

Post published her first version of the etiquette book under a different name in 1922. The book has been changed over the years, but the 20th edition, which was released in October, is its biggest update.

The new book still has advice for setting dinner tables and dressing up for different events. There is also advice on how to give gifts and how to give extra money to food servers. But Post, and her cousin and co-writer, Daniel Post Senning, are interested in modern issues. They have included ideas from people who called in to their Awesome Etiquette podcast program.

Some of the issues have been made timely by the COVID-19 pandemic and the #MeToo movement, which reacted against sexual abuse. The book covers issues like handshakes, and seeking permission to hug or kiss on the cheek — actions that once were common.

There is also advice on how to handle failed marriages and separations.

"Avoid trying to push or suggest the right decision for a friend," the Posts write in the new book. "It's especially important to be careful what you say around children whose parents are separated or divorcing."

The book also deals with subjects that were not described in Emily Post's time, like mourning a miscarriage.

You do not want to say things like "'Next time it'll happen,'" or "`This just wasn't your time,'" the book advises.

Emily Post grew up in Baltimore, Maryland and New York City. But through her travels, Emily learned more about the lives of those outside her social status.

The younger Posts also deal with the subject of privilege. In the book they write: "Privilege can be and sound like many different things, but...it mostly comes across as a lack of awareness that you have benefited in a way others may not have."

Modern-day manners on gender pronouns, like "he" and "she," are also discussed in the new book. Using the pronoun a person wants to be called is a way to show to support and respect, the book says.

"You might think someone's pronouns are easy enough to tell just by looking at them, but the reality is this isn't always the case," the Posts wrote.

In her books, Emily Post grew "more inclusive over the years," said the Lizzie, her great-great granddaughter. Emily Post's etiquette became based more on education than wealth, she said.

manners — n. a right or good outcome that is given to some people but not to others

elitism — n. giving special treatment to people because they are rich or powerful

exclusion — n. to prevent someone from doing something or being party of a group

reflect — v. to think about it a deep way

miscarriage — n. a condition where a mother loses her unborn baby because of a problem with the pregnancy

privilege — n. something that some people have that others do not