A New Environmental Machine Is Cleaning Up a Panama River

Update Required To play the media you will need to either update your browser to a recent version or update your Flash plugin.
By Caty Weaver
06 November 2022

The wheel is powered by water and solar energy. It pulls waste out of the Juan Diaz River. Most of the waste comes from the capital area of Panama City where about 2 million people live. Thousands of kilograms of trash flow down the river into the ocean each year. 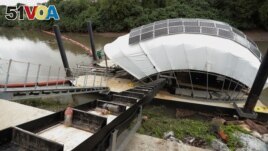 Robert Getman is the leader of the project.

"Cleaning beaches is good," he said, "but it is more effective and cheaper to trap garbage in rivers because when it reaches the ocean, the environmental and economic cost becomes too high."

The environmental group Marea Verde launched the wheel, which is named Wanda Diaz, in late September. By the middle of October, Wanda had gathered 28.6 cubic meters of plastic bottles from the water.

The Juan Diaz River is one of the most polluted in Panama. Waste systems in the area are poor, and land development is not well supervised. The river also passes through Panama City, one of Central America's largest cities.

Still, the waterway and its mangrove trees are home to lizards, turtles and birds.

Over five years, Marea Verde projects have slowed the spread of trash along Panama's rivers and coastline.

Before the coronavirus pandemic struck, the group launched its "Barrier or Trash" technology, a floating device. It captured more than 100 metric tons of waste in the Matias Hernandez River between 2019 and 2020.

The Baltimore Bay "Trashwheel" in the United States was the model for Marea Verde's Wanda machine. Wanda even has cameras with artificial intelligence that can recognize and sort different plastics.

"We want to raise awareness that we can prevent the death of this very important river," said Marea Verde leader Sandy Watemberg. She expressed her hope that the wheel will help.

But she also pointed to the need for those who use single-use plastics to rethink their behavior.

"The most important thing is to achieve a change in habits," she said.

beach –n. an area next to the sea, lake or river that is covered with sand or small rocks

garbage –n. waste, things that are thrown away

achieve –v. to get or reach something by working hard

habit –n. something that a person does regularly.