Update Required To play the media you will need to either update your browser to a recent version or update your Flash plugin.
By Andrew Smith
01 November 2022


Two NASA spacecraft have recorded the biggest meteor strikes and impact craters on Mars than ever before.

One of the spacecraft is on Mars' surface. The other is orbiting the planet.

The impacts last year produced seismic waves that travelled thousands of kilometers across Mars. These are the first seismic waves scientists have ever found near the surface of another planet. The hits produced craters nearly 150 meters wide, scientists reported Thursday in the journal Science. 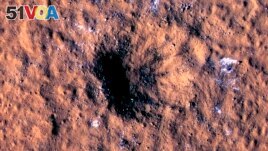 In this image made available by NASA on Thursday, Oct. 27, 2022, boulder-size blocks of water ice are seen around the rim of an impact crater on Mars. The crater was formed Dec. 24, 2021, by a meteoroid strike. (NASA/JPL-Caltech/University of Arizona via AP)

The larger of the two strikes threw out large pieces of ice. That information may help researchers find ways future astronauts can use Mars' natural resources.

The Insight lander measured the seismic waves, while the Mars Reconnaissance Orbiter provided pictures of the craters.

Liliya Posiolova of Malin Space Science Systems in San Diego is one of the study investigators. She said scientists were lucky to be able match the seismic waves with pictures of the impact craters.

Mars' atmosphere is thin. On Earth, the thick atmosphere stops most space rocks from reaching the ground. Instead, the rocks break apart and burn in the atmosphere.

InSight is close to the end of its operation. Its power equipment is covered in dust from storms on Mars and failing. InSight landed on Mars in 2018 and has since recorded more than 1,300 marsquakes. A marsquake is similar to an earthquake.

Bruce Banerdt of NASA's Jet Propulsion Laboratory, the lander's chief scientist who took part in the studies, estimated the lander had between four to eight more weeks before power runs out.

The space rocks were between 5 meters and 12 meters wide, said Posiolova. The larger of the two struck last December about 3,500 kilometers from InSight, creating a crater about 21 meters deep. The Orbiter's cameras showed material thrown as far as 40 kilometers from the impact. They also showed white spots of ice around the crater, the most frozen water observed at such low latitudes, Posiolova said.

Posiolova found the crater earlier this year after taking extra pictures of the region from orbit. The crater was missing from earlier photos. After looking at older photos, the scientist dated the impact to late December. She also remembered a large seismic event recorded by InSight around that time. With help from the Insight team, Posiolova connected the new hole to the strike.

Scientists also learned that the lander and orbiter both recorded an earlier meteoroid strike. It was more than double the distance of the December one and a little smaller.

"Everybody was just shocked and amazed," Posiolova remembered.

The seismic readings from the two impacts point to a denser Martian layer of ground beyond InSight's location.

Doyeon Kim of ETH Zurich's Institute of Geophysics in Switzerland, was part of the research. He said scientists still have much to learn about the deeper structure of Mars.

Outside scientists said future landers from Europe and China will carry even more advanced equipment to detect seismic waves.

meteor -n. A piece of rock that flies into a planet from space

impact -n. the sudden, often strong effect of something or the physical area where an object has struck another object

crater -n. a hole in the ground created by the impact of an object such as a meteor or a bomb

seismic -adj. referring to vibrations or shaking of a planet's surface in events such as earthquakes, volcanic eruptions, or explosions

latitude -n. the distance of a location from a planet's equator

amaze -v. to fill with sudden surprise, to astonish