Colorado Could Become First US State to Reuse Water

Update Required To play the media you will need to either update your browser to a recent version or update your Flash plugin.
By John Russell
26 October 2022


Colorado's water quality agency recently gave early approval to rules about direct potable reuse. It is a process of treating sewage and sending it directly for use without first putting it in a large water body.

Should the move be approved in a final vote in November, the western state would become the first in the United States to adopt direct potable reuse rules, state and federal officials say.

Kevin Reidy of the Colorado Water Conservation Board said that as Colorado's population increases, drinking water reuse is an important way to deal with reduced water supplies. 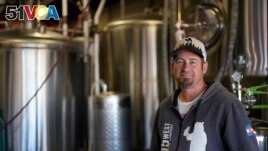 The water reuse treatment process usually involves disinfecting wastewater with ozone gas or ultraviolet light to remove viruses and bacteria. Then the water is put through barriers with very small openings, or pores, that remove solids and dangerous materials known as contaminants.

The process is gaining interest as communities deal with long periods without enough rain. While many U.S. states do not directly forbid this kind of water reuse, statewide rules could bring quicker adoption, said Reidy.

There are no exact federal rules for direct potable reuse. However, reuse projects must meet federal health rules for drinking water.

Florida, California and Arizona are now working on rules for direct potable water reuse. And several other states are beginning the process or have existing projects. As the water level of the Colorado River continues to drop, Arizona faces deep water cuts, while pressure grows for California to give up more of its share.

Denver and Colorado Springs — Colorado's most populous cities — already recycle most of their water through exchanges with other cities and for non-drinking uses, such as watering parks. Both cities expect to someday reuse water for drinking purposes, but officials are concerned their reusable supplies from the stressed Colorado River soon could face cuts.

Greg Fisher of Denver Water was concerned about the time it takes to build a large direct potable reuse system.

"If you've built a big direct potable reuse system and you don't have it even for a few years, that causes some problems," he said.

"If we are relying on those reusable (drinking water) supplies to meet our customers' needs, our ability to meet their needs is put at risk," Fisher added.

Still, some people in Colorado are already making creative use of recycled water.

When Eric Seufert brewed a test batch of beer in 2017 with water from recycled sewage, he was not too concerned about the outcome. The engineering company that contacted him about the test explained the process, and together they drank samples of recycled water. Seufert quickly understood the process was not too different from how water is normally treated.

"Every ... river in this country has someone putting in their wastewater after they've treated it," he said.

After opening the beer and having a taste, the owner of 105 West Brewing Co. in Castle Rock, Colorado now served it to others.

Seufert already knows he can make good beer from recycled water. He is more worried about keeping the cost of business down.

"I'm concerned that the resources will be there for the planned growth in an affordable way for this region," Seufert said. "But, as of now, I trust that" state officials "are working on it."

Brittany Peterson reported on this story for the Associated Press. John Russell adapted it for VOA Learning English.

sewage – n. waste material (such as human urine and feces) that is carried away from homes and other buildings in a system of pipes

wastewater – n. water that has been used in a home or business

recycle – v. to use (something) again; to make something new from (something that has been used before)

batch – n. an amount of something that is made at one time