Update Required To play the media you will need to either update your browser to a recent version or update your Flash plugin.
By Bryan Lynn
07 November 2022


After the U.S. Supreme Court's decision to overturn Roe v. Wade, more women have registered to vote in this year's midterm elections.

The high court overturned Roe v. Wade – which guarantees a woman's right to an abortion – in June. An abortion is a medical procedure that ends a pregnancy.

Voter registrations among women rose by 35 percent in 10 states that share such data, an investigation by the New York Times found. The states include Kansas, Pennsylvania, Ohio, Oklahoma, Florida, North Carolina, Idaho, Alabama, New Mexico and Maine. The U.S. midterm elections will be held Tuesday, November 8. 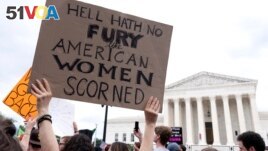 The data shows that women have also been registering at higher levels than men in states like Wisconsin and Michigan, where reproductive rights are at risk.

Voters in Michigan will decide whether to change the state's constitution to include protections to make abortion available. In Wisconsin, an 1849 law banning almost all abortions is making its way through the courts.

Tom Bonier is a democratic political strategist. He told VOA he has not seen such an increase in women voter registrations in his 28 years studying elections. "We're seeing women engage politically at a greater rate than I've seen before," he said.

Historically, the U.S. president's party loses seats in Congress during the midterm elections. Since President Joe Biden is a Democrat, some experts had predicted big wins for the Republican Party. In addition, many Republicans in Congress support the Supreme Court's decision on Roe v. Wade, while many Democrats oppose it.

However, political experts are questioning whether the increased registrations among women will turn into actual votes.

Samuel Abrams is a professor of politics at Sarah Lawrence College in New York. He told VOA that today's political environment makes it much harder to predict how issues such as abortion will lead voters to decide on election day. "We used to have models that were predictive," Abrams said. "We do not have good models that predict this right now."

The first test of reproductive rights after the Supreme Court's ruling came in Kansas in August. Fifty-nine percent of citizens voted to keep abortion protections in place in the solidly Republican state. This result sent a strong signal that abortion rights do not only matter to liberal, Democratic voters.

Bonier said, "There are pro-choice Republicans. But there are also Republicans who might not personally be pro-choice, but they were against the notion of the government taking away an established right."

In Kansas, voters took part in a referendum. This meant they were not forced to choose between Democrats and Republicans. Experts are watching to see whether large numbers of Republicans feel strongly enough about abortion rights to cross party lines.

"I don't think it's going to be as potent. ... I think the [Supreme Court] decision is old enough that the intensity has changed," Abrams said.

Amanda Hunter leads the Barbara Lee Family Foundation, an independent group that works to advance women's representation in American politics. She told VOA that even before the Supreme Court's ruling on abortion rights, women had other reasons to get involved in the political process.

Hunter noted that the COVID-19 pandemic showed weaknesses in social systems for women. "A lot of things that women didn't think about or took for granted, like child care, like the public school system ... were all turned upside down," she said.

strategist – n. someone with a lot of experience in planning, especially in military, political or business matters

notion – n. a belief or idea

referendum – n. an election in which people in an area vote on a specific issue