North Korea: Missile Tests Are Preparation for an Attack

Update Required To play the media you will need to either update your browser to a recent version or update your Flash plugin.
By Andrew Smith
07 November 2022

This year's drills involving the U.S. and South Korea were the largest ever for their annual fall exercises. The drills involved 240 warplanes including high-technology F-35 fighter jets. The allies had planned to carry out drills for five days ending on Friday. But South Korea and the U.S. held an additional day of training in reaction to the North's missile tests.

The General Staff of North Korea's military said in a statement that the North will answer U.S. and South Korean military exercises with more of its own exercises. 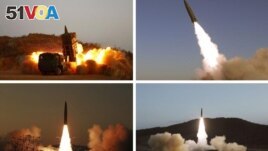 North Korea launched more than 20 missiles and flew warplanes towards its sea border last week. Those actions caused evacuation warnings in some areas of South Korea and Japan.

The North's military said it also tested a ballistic missile with a special warhead with the goal of "paralyzing the operation command system of the enemy." Some observers suggest the statement could describe an attack using electromagnetic energy. But it is unclear whether North Korea has developed such technology or can use it.

On Saturday, the final day of the air force exercises, the United States flew two B-1B bombers over South Korea for the first time since December 2017.

South Korea's Joint Chiefs of Staff said the B-1Bs showed the allies are ready to answer North Korea's provocations. They also said it showed the U.S. will defend its ally with all its forces, including nuclear weapons.

U.S. Defense Secretary Lloyd Austin warned on Thursday that any nuclear attacks against the United States or its allies and partners "is unacceptable and will result in the end of the Kim regime." South Korea's military warned earlier that using nuclear weapons would put the North on a "path of self-destruction."

Some experts said the missiles launched last week were short-distance missiles that could carry nuclear warheads. The missiles could threaten important military bases including U.S. bases.

South Korean and U.S. officials have continued to say their drills are defensive and that they are not planning to invade the North.

U.S. and South Korean militaries have been expanding their regular drills since May when South Korean President Yoon Suk Yeol took office. Yoon has promised to take a stronger position against North Korea.

In recent years, some of the exercises were reduced or canceled. The reduction was meant to support diplomatic efforts aimed at ending North Korea's nuclear program or to deal with the COVID-19 pandemic.

evacuation –n. the process of leaving or being removed from a place because of danger there

ballistic missile –n. a missile that travels large distances and falls to the ground and explodes

paralyze –v. to cause something to not move forward or prevent it from happening

provocation –n. an action that is aimed at causing people to get angry or upset

regime –n. a form of government