Update Required To play the media you will need to either update your browser to a recent version or update your Flash plugin.
By Bryan Lynn
08 November 2022


Early reports say one winning ticket for the largest lottery prize in United States history has been sold to someone in Southern California. The record jackpot is worth $2.04 billion.

Lottery officials said the jackpot ticket was sold at a business called Joe's Service Center in Altadena, a community northeast of Los Angeles.

The latest drawing for the lottery winnings, known as the jackpot, was held Tuesday morning. That drawing had been delayed Monday night because of a sales processing problem. 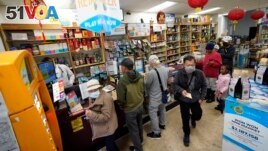 Madeline Copper, second from right, and her granddaughter, Lay-Lonnie, 5, stand in line to buy Powerball lottery tickets at the Wo Won Mini market in the Chinatown district of Los Angeles, Monday, Nov. 7, 2022. (AP Photo/Damian Dovarganes)

The lottery is called Powerball. It is played by people in 45 U.S. states, as well as Washington D.C., Puerto Rico and the U.S. Virgin Islands.

The jackpot was estimated to be $1.9 billion on Monday. But the prize was increased to $2.04 billion on Tuesday morning.

Tuesday's drawing followed one on Saturday that was the 40th in a row without a winner of the big prize. The jackpot grows larger each time it goes unclaimed.

The $2.04 billion prize is for a winner who chooses to receive yearly payments over 29 years. However, nearly all winners instead choose to be paid in cash, which greatly lowers the amount. Lottery officials did not immediately provide a value for the one-time cash payment, but it was likely to be around $1 billion.

The odds of winning the current jackpot are 1 in 292.2 million.

The previous record for a Powerball jackpot was set in 2016 when three ticket holders from California, Florida and Tennessee shared a $1.59 billion top prize.

The Associated Press and Reuters reported this story. Bryan Lynn adapted the reports for Learning English.

lottery – n. a contest that involves selling number tickets to people who have a chance at winning a prize if their number is chosen

drawing – n. a competition that is decided by choosing a particular ticket number

match – v. to be equal in quality or strength

cash – n. money in the form of coins or notes

odds – n. the probability that something will happen