Update Required To play the media you will need to either update your browser to a recent version or update your Flash plugin.
By Bryan Lynn
12 November 2022


A controlled fishing system in Brazil's Amazon River area is helping to save an endangered fish.

The fish is the pirarucú. It is also known in Brazil as arapaima. The pirarucú is believed to be the largest of 2,300 different kinds of fish known to live in the Amazon Basin. It can grow to be three meters long and weigh up to 200 kilograms.

The fish mostly live in lakes across large areas of the Brazilian Amazon. They are carnivores, meaning they feed on other fish. 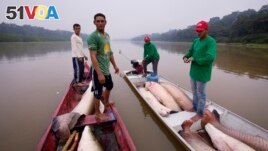 Fishermen join boats to pass fish from the boat used to catch, left, to the motorized one, right, used to transport it faster to the processing ship, in San Raimundo settlement lake, Carauari, Brazil, Tuesday, Sept. 6, 2022 (AP Photo/Jorge Saenz)

The pirarucú is considered endangered because of overfishing. Illegal fishing activities left many communities struggling to find the fish, which traditionally is an important food.

In recent years, however, illegal fishing of the pirarucú has been sharply reduced. And the fish has increasingly been recovering. The Associated Press (AP) reports the improvements came after efforts that included close cooperation between communities and complex logistics.

One of the unusual things about pirarucú is that they need to breathe air to survive. The fish need to take at least one breath every 20 minutes. They rise to the surface to do so.

This behavior by the fish makes it easier to count how many pirarucú are active in an area. A count of the fish is now carried out once a year by fishermen trained to use the method. By law, only 30 percent of pirarucú in a certain area can be fished the following year.

Pirarucú fishing is now done once a year, around September, the period when water levels are lowest.

Efforts have led to increases in the pirarucú population in areas where it is used. In the Sao Raimundo area, there were 1,335 pirarucús in nearby lakes in 2011, when controlled fishing began. Last year, records showed there were 4,092.

Manoel Cunha leads a group of workers involved in the rubber trade in Sao Raimundo. He told the AP the controlled fishing efforts have greatly reduced illegal catch operations in the area. "You have been on this river for days now, and you have not seen any fishing boats except the ones from our organizations," Cunha said. "There is no more room for them here."

A sister of Cunha, Rosilda, said the pirarucú bring money into the community. "Our pirarucú is so tasty, everybody that eats it falls in love with it and wants more," she said.

In the Amazon, the fish is generally salted, sun dried and sold in local markets. It is also exported to the United States and Mexico.

Processing of the fish is completed by members of the Association of Rural Producers of Carauari, known as Asproc. It is an organization created by local rubber workers who wanted to free themselves from slave-like working conditions.

The organization permits community members to share in the profits of harvesting the fish.

Asproc currently runs other programs on everything from waste control to community markets to higher education. The organization sells pirarucú to Brazil's main cities including Sao Paulo and Brasília. This is a complex process that involves several days of transportation by boat and road, taking up to two weeks.

Asproc has formed partnerships with two American government agencies, the U.S. Forest Service and the Agency for International Development (USAID). Both have supported the area's controlled fishing and processing operations.

"This project is unique as it requires a strong governance structure," said Ted Gehr, USAID's mission director in Brazil. "Everybody is in agreement that they may have to sacrifice and not be able to fish all of the pirarucú that are available... but knowing that they'll reproduce more, and that in the long run they will be more valuable," Gehr added.

logistics – n. the practical arrangements and process for something

unique – v. different from everyone or everything else

sacrifice – n. something valuable you give up in order to achieve something