First Member of Generation Z Elected to US Congress

Update Required To play the media you will need to either update your browser to a recent version or update your Flash plugin.
By Dan Friedell
10 November 2022


Twenty-five-year-old Maxwell Frost had just been elected to represent part of Florida in the U.S. House of Representatives when his phone rang.

"Hold for the president," the caller on the phone said.

Frost shared the story about his call from U.S. President Joe Biden with his Twitter followers on Wednesday. 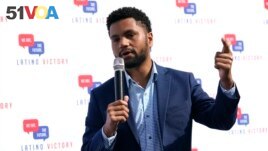 Biden called to congratulate Frost on his election win.

Frost is the first member of "Generation Z" to become a U.S. representative. Generation Z is the group of people born from the late 1990s to the early 2010s. There are about 70 million Americans in Frost's age group.

Starting in January, Frost will represent people who live near Orlando, Florida. He won 59 percent of the vote.

The U.S. Constitution requires members of congress to be at least 25 years old. The average age of a member of congress this year is 58.

In a news conference after this week's midterm elections, Biden talked about Frost. He said, "I have no doubt he's off to an incredible start in what I'm sure will be a long, distinguished career."

Frost is a member of the Democratic Party. He campaigned on gun law reform, expanding health care, increasing access to housing and fighting climate change.

In a discussion with the ABC television network on Wednesday, Frost said younger voters were an important part of his win.

"What that shows me is that there's a lot of hope and promise in this nation as young people are starting to rise up and really step into their political power," Frost said.

Frost said his family is Afro-Latino. He is part of a growing number of Americans who are more racially and ethnically diverse than earlier generations.

Frost became known as a national director for the gun safety group March For Our Lives, started by the survivors of the 2018 school shooting in Parkland, Florida.

He said he wants "transformational change" and will start by working on a plan to put background checks in place for all gun purchases.

Frost defeated three well-known Democrats in the primary election earlier this year. He takes over the position that opened when Val Demings gave up her position to run for the U.S. Senate.

distinguished –adj. known by many people because of a quality or achievement

access–n. a way of getting to or being able to use something

transformational –adj. a major change from what is currently in place

background check –n. a way of looking at a person's history to decide if they are permitted to do or purchase something