Update Required To play the media you will need to either update your browser to a recent version or update your Flash plugin.
By Gregory Stachel
09 November 2022

The meeting is the 27th held since the first U.N. climate agreement in 1992. 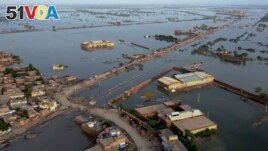 For more than 10 years, wealthy nations have rejected official discussions of what is called loss and damage. The U.N uses the term to describe damage from weather events blamed on warming temperatures caused by human activity. The term also is used in the insurance industry to describe things that are or are not covered by insurance policies.

United Nations officials said they are looking for "something meaningful in loss and damage." They added they were hopeful that the issue would be discussed in the meetings.

Money for loss and damage would be in addition to two other financial aid systems already proposed to help poor nations. Those systems aim to reduce the amount of heat-trapping gasses poor nations produce.

Since 2009, the rich nations of the world have promised to spend about $100 billion in climate aid for poor nations. Most of that money is meant to limit the expansion of the coal, oil, and natural gas industries and replace them with what are called "green" energy systems. Officials now want as much as half of the promised aid to go to dealing with future weather disasters blamed on changes in the many climates that exist around the world.

Neither form of financial support has been carried out yet. But both are separate from the idea of paying for current and past weather disasters, such as high temperatures in India, floods in Pakistan, and droughts in Africa.

Also, U.N. Secretary-General Antonio Guterres, some European leaders, and U.S. President Joe Biden have called for a tax on oil companies. The leaders want the energy companies to pay a windfall profits tax on gains earned while oil prices are high.

Leaders in many countries say they want some of that money in addition to aid from rich nations. They say the leading industrial nations created much of the heat-trapping gases that are blamed for changing climates around the world.

Adelle Thomas of the Bahamas is a scientist with Climate Analytics, a non-profit group based in Berlin. Thomas said, "Our current levels of global warming at 1.1 degrees Celsius have already caused dangerous and widespread losses and damages to nature and to billions of people."

She added, "Losses and damages are unavoidable and unequally distributed" among poor nations, the old, poor and weak.

U.S. and European officials say they are willing to have loss and damage discussions after not wanting to for years. But the top U.S. climate diplomat, John Kerry, said the U.S. will not agree to anything that sounds like liability.

Justin Mankin of Dartmouth College in New Hampshire said, "Loss and damage is a way of both recognizing past harm and compensating for that past harm." He added that, "These harms are scientifically identifiable..." He said it is now up to "the politics" to either defend that harm or pay for it.

"In many ways we're talking about reparations," said University of Maryland environmental health and justice professor Sacoby Wilson. He said it is the right term to use because the rich northern countries gained from the use of fuels. Poor southern nations got the damage in floods, droughts, refugees and hunger.

The government of the island of Barbados has suggested changes in how development banks loan money to poor nations. It wants banks to consider the risk of damage from climate change and disasters. Pakistan and other nations have called for debt to be cancelled.

Climate diplomat Avinash Persaud of Barbados suggests an unusual long-term tax on oil, coal, and natural gas sales. At current high energy prices, he proposes that there should be no tax. He said this would prevent inflation. But once fuel prices fall by 10 percent, one percent of the price drop would go to countries facing loss and damage from disasters blamed on climate change.

He said, "This is a difficult subject area. It's been floating for thirty plus years." He added what will be most telling is how discussions progress over the next two weeks.

The U.N. climate conference on Egypt's Red Sea coast will last until November 18.

insurance –n. an agreement in which a person or group makes payments to a company in exchange for the promise that the company will pay for loss or damage to the insured object or person

fossil fuel – n. a fuel (such as coal, oil, or natural gas) that is formed in the earth from dead plants or animals

windfall profits tax – phr. n. a one-time tax on a company or industry when economic conditions result in large and unexpected profits

distribute – v. to spread or place (something) over an area

reparations – n. money and other forms of support and payment that a state gives to another state or group for damages and injuries they caused, often due to war or historical injustices

liability – n. the legal responsibility for something

compensate – v. to give money to make up for loss or damage