Update Required To play the media you will need to either update your browser to a recent version or update your Flash plugin.
By Dan Friedell
14 November 2022

A large piece of the spacecraft was discovered at the bottom of the Atlantic Ocean off the coast of Florida. The site is not far from the U.S. space agency NASA's Cape Canaveral launch area. NASA confirmed the discovery on November 10.

The piece is from the space shuttle that exploded shortly after liftoff from Cape Canaveral on January 28, 1986. The last time anyone found part of the Challenger was in 1996. 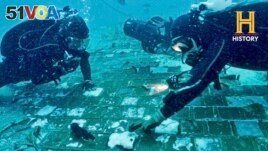 Michael Ciannilli is a NASA official who confirmed that the newly discovered piece was real.

He told The Associated Press when he first saw video of the space shuttle piece, "my heart skipped a beat ... and it brought me right back to 1986 ... and what we all went through as a nation."

Ciannilli said the piece appears to be at least 4.5 meters long and 4.5 meters wide. It could be larger, though, because some of it was covered by sand. He said he thinks the piece may have been from the underside, or belly, of the shuttle.

NASA said it is still thinking about whether to launch a recovery operation to get the shuttle piece or to leave it in the ocean. "We want to make sure ... we do the right thing for the legacy of the crew," Ciannilli said.

About 47 percent of the Challenger shuttle has been recovered since the accident. Much of it is buried in unused sites at Cape Canaveral. Some of it is shown at a NASA visitor's center, next to a piece from the Columbia space shuttle. Columbia broke apart on its way back to Earth over Texas in 2003, killing all seven astronauts on board.

legacy –n. the lasting memory or feeling about someone who lived before

fault –n. a problem or bad part that prevents something from being perfect : a flaw or defect