Update Required To play the media you will need to either update your browser to a recent version or update your Flash plugin.
By Rachel Dennis
31 March, 2018


Wildlife researchers in Georgia and Florida are concerned about the population of endangered whales. The winter birthing season just ended, but no newborn sightings have been reported.

There are currently an estimated 450 North Atlantic right whales.

Since December, researchers have been looking for newborns off the coasts of Georgia and Florida. Each winter, pregnant female whales migrate to the area to give birth in warmer waters, usually from December to late March. 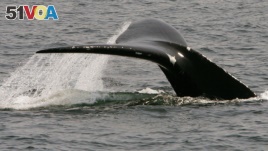 "It's a pivotal moment for right whales," Zoodsma said. "If we don't get serious and figure this out, it very well could be the beginning of the end."

Research on the whales have found that most female right whales are only living only to half their expected years. Research on the whales that gave birth last year showed that they were having babies for the first time in seven or eight years. That is more than double the usual time between pregnancies.

Philip Hamilton is a scientist at the New England Aquarium in Boston. Hamilton has studied right whales for 30 years.

He said, "Following a year of such high mortality, it's clear the population can't sustain that trajectory."

This is why researchers are saying more needs to be done to protect the species.

In January, conservationists like the Defenders of Wildlife and the Center for Biological Diversity took legal action against the U.S. government. They argued that it failed to protect right whales as ordered by the Endangered Species Act. The Center called for more restrictions on the fishing industry.

Examinations of the 17 bodies showed that a ship had hit at least four of the right whales. Another two of the deaths were caused by fishing gear entanglement.

As a result, some fishermen are testing equipment designed to bring traps to the surface. Others are experimenting with equipment that will prevent large whales from being trapped in the first place.

Net trapping is not always deadly. But, scientists suspect that a trapping incident causes emotional effects that could harm a pregnancy.

Nonetheless, there is still hope for the right whale population.

As the whales return to their feeding areas this spring, scientists plan on looking for newborn stragglers.

Charles "Stormy" Mayo is a right whale researcher in Provincetown, Massachusetts at the Center for Coastal Studies. Mayo remains hopeful about the possibility that right whale babies were born this season a little further north, as far up as Virginia's coast.

In Cape Cod Bay last year, two calves were seen that had not been seen earlier in the south.

It is also possible that after a light birthing season this year, a baby boom could happen next year. This has been happened before. In 2000, only one newborn birth occurred while the following year there were 31 births.

Zoodsma said, "I do think we can turn this around. But it's sort of like, what's our willpower to do so? This is a time for all hands on deck."

Rachel Dennis adapted this story for Learning English based on Associated Press reports. Caty Weaver was the editor.

figure (something) out - phrasal verb. to understand or find (something, such as a reason or a solution) by thinking

sustain - v. to provide what is needed for (something or someone) to exist, continue, etc.

trajectory - n. used to describe a process of change or development that leads toward a particular result

migrate – v. to move from one place to live or work in another

straggler - n. : a person or animal that moves slower than others and becomes separated from them

calf - n. the young of various other large animals (such as the elephant or whale)

all hands on deck – idiom. used to say that everyone is needed to help in a given situation