Update Required To play the media you will need to either update your browser to a recent version or update your Flash plugin.
By Mario Ritter
01 October, 2017


Hurricane Maria severely damaged Puerto Rico's electricity and communications systems. Millions of people there are without power, water or food.

The storm also caused damage to a well-known scientific tool in the U.S. territory – the Arecibo Observatory. Until last year, it was the largest single telescope of its kind in the world.

Many of the observatory's instruments appear to be unharmed. Arecibo Deputy Director Joan Schmelz called that "a thing to be thankful for" in an interview with the Associated Press.

But a large antenna used to study the Earth's upper atmosphere broke during the storm, the AP reported. Damage to the observatory is estimated to be in the millions of dollars.

The observatory is home to the Arecibo radio telescope, a 305-meter- wide dish. It collects radio waves and focuses them onto scientific instruments that measure and process them. The instruments are suspended above the dish on towers over 80 meters high.

During the storm, a small group of researchers remained at the observatory. They stayed in its concrete buildings. They had some food and water, but, like most in Puerto Rico, were cut off from the rest of the world.

Perhaps not surprisingly, the first people that the researchers were able to contact after the storm were amateur radio operators.

The storm damage threatens the telescope's future in several ways. It is supported by the National Science Foundation, or NSF, in Alexandria, Virginia, as well as the U.S. space agency, NASA.

Funding limitations and the desire to build and operate newer telescopes has made the NSF think about cutting its support for older telescopes. Arecibo could face closure if money cannot be found to repair it and to continue operations.

The Arecibo radio telescope has been involved in well-known scientific research since first being used in the 1960s. It was used to find an unusual kind of star system, a binary pulsar, in 1967. The discovery received a Nobel Prize in 1974.

The huge dish was also part of the SETI project, an effort to search for signs of extraterrestrial life.

The Arecibo telescope was surpassed in size last July by the Five-hundred-meter Aperture Spherical Telescope in Guizhou, China. 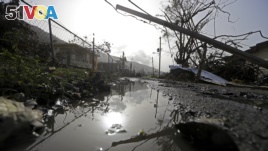 Downed power lines and debris are seen in the aftermath of Hurricane Maria in Yabucoa, Puerto Rico, Sept. 26, 2017.

The observatory is expected to be closed for some time because of the damage. Scientists may be able to carry out some kinds of observations soon, but others will not be possible for a long time.

James Ulvestad is acting director for NSF's math and physics directorate. He said research, like bouncing radar off of other planets, requires a lot of power from the island's electricity grid, which was severely damaged by the hurricane.

The recovery response has been slow, as supplies need to be flown in or shipped to the island.

President Donald Trump has promised the island aid. Damage is estimated to be in the billions of dollars. Meanwhile, workers with the Federal Emergency Management Agency are trying to set up aid centers across the U.S. territory.

Puerto Rico's government is also burdened by tens of billions of dollars in debt that it is unable to pay. The island is seeking protection from its creditors in the biggest government bankruptcy in U.S. history.

Mario Ritter adapted this story from an AP report and additional material for VOA Learning English. Ashley Thompson was the editor.

dish – n. a round, curved surface

focus – v. bringing light rays or some other electromagnetic radiation closer together to form an image

detect – v. to find, to confirm the presence of

asteroids – n. rocks or planet-like objects that orbit the sun

amateur – n. a person who does something for pleasure and not as a job

extraterrestrial – adj. beyond the Earth, from space

electricity grid – n. the system of generators, transformers and wires designed to provide electricity to a large area

burden – v. to carry or to deal with a heavy or difficult load