Update Required To play the media you will need to either update your browser to a recent version or update your Flash plugin.
By Alice Bryant
05 May 2021


Latin American countries are increasingly looking to space to speed their development.

Nicaragua is one of the poorest nations in the Americas and has experienced many conflicts. But on February 17, the nation's congress approved a law to form a space agency. Costa Rica, known for its growth and stability, did the same on February 18.

Many countries with limited financial resources see the possible benefits of space. They are interested in satellite technology, international partnerships and local development. But critics say space programs are taking away from pressing problems on the ground.

Temidayo Oniosun is managing director of Space in Africa, a research, media and advising company. In an email to The Associated Press, he said critics often question why countries like Nicaragua or African countries want space programs.

He said these countries rarely begin space programs to explore the moon or Mars. Instead, they are mostly interested in using space to solve development issues. 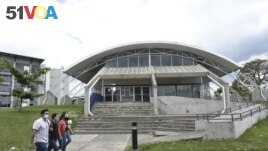 The growth of the space industry and the possibility for internet connectivity from satellites could help countries lacking internet coverage. Satellite information can also guide crop-growing, help predict natural disasters and help industry. Satellites also can closely watch weather and conditions linked to the spread of disease.

Nicaragua is not new to space aims. But an old deal with China years ago for the deployment of a communications satellite has been delayed. In 2017, Russia opened a station in Nicaragua as part of a satellite navigation system. Nicaragua denied that it was spying on Latin America or the United States.

Nicaragua understands others distrust its new, military-run space program. Jenny Martínez is a lawmaker in Nicaragua. She said more than 50 countries in the world have space agencies. Nicaragua has been a member since 1994 of the United Nations Committee on the Peaceful Uses of Outer Space. The U.N. agency oversees agreements that govern space law.

Carlos Arturo Vélez is an Ecuadorian lawyer studying air and space law at Leiden University in the Netherlands. He told The Associated Press that Nicaragua does not need to send things into space to be part of the system.

"Doing something wrong in outer space could affect any country in the world," he said. For example, parts of a satellite could crash to Earth cause damage, injuries or death.

Ecuador launched a satellite called Pegaso in 2013 with help from China. But the satellite was damaged one month later. It is believed to have hit pieces of an old Russian rocket.

Supporters of Costa Rica's space objectives say its new agency can contribute to technologies used on Earth. It can also give Costa Rica influence in international space policy and agreements.

Franklin Chang Díaz is a Costa Rica-born U.S. citizen who became a NASA astronaut. In a statement, he said, "A lot of people criticized the creation of NASA in 1958 when the United States was struggling with the worst economic recession" since World War II.

He said NASA putting a person on the moon sometimes gets more attention than the more important technological and economic benefits that followed.

Costa Rica's first satellite, called Irazú, was launched on an American SpaceX rocket in 2018. Its aim is to watch rainforests and climate change. The satellite was partly paid for by an online money-raising campaign.

"It's not surprising" that Costa Rica passed a space agency law and hopefully Guatemala will do the same, said Katherinne Herrera. She is a student at the University of the Valley of Guatemala. Herrera heads a student group on space science and engineering.

A country needs public policies that support space programs and help reach its research goals, Herrera wrote in an email.

Guatemala's first satellite was deployed by Japan last year. Called Quetzal-1, it was operated by a team from the university where Herrera is studying. The project took place in a country whose problems have led many citizens to look for a better life in other places.

Bolivia's space agency got caught up in the country's recent political problems. The new government accused former temporary leadership of delaying operations at the agency. The space agency was set up in 2010 by then-President Evo Morales.

There are other examples of Latin America's space developments. Brazil's science and technology minister, Marcos Pontes, is a former astronaut who trained with NASA. Chile is home to several international research telescopes. The European Space Agency launches rockets from French Guiana on South America's northeast coast. And now Mexico and Argentina are leading efforts to form a regional space agency.

The African Union is also planning a space agency, to be based in Egypt.

Mexico's Congress on Monday held an international meeting on what it called the ''new space race″ and what it can do for health, education and other fields. Senator Beatriz Paredes Rangel said, "The future is in our hands and if we're not a part of it, we will disappear" or waste the chance to help build the future.

Christopher Torchia reported this story for the Associated Press. Alice Bryant adapted it for VOA Learning English. Mario Ritter, Jr. was the editor.

stability –n. a quality or state of not being not easily changed

manage –v. to have control of something, such as a business

navigation –n. the activity of finding the way to get to a place when you are traveling by in a vehicle

contribute –v. to help to cause something to happen

regional –adj. a part of a country, or of the world, that is different from other parts in certain ways