Words and Their Stories: Nose and Ear Expressions

Update Required To play the media you will need to either update your browser to a recent version or update your Flash plugin.
By Jill Moss
17 May, 2014

A person's nose is important for breathing and smelling. The nose is also used in many popular expressions.

Some people are able to lead other people by the nose. For example, if a wife leads her husband by the nose, she makes him do whatever she wants him to do. 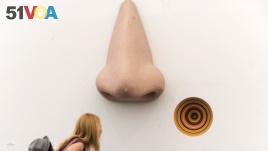 Some people are said to be hard-nosed. They will not change their opinions or positions on anything. If someone is hard-nosed, chances are he will never pay through the nose, or pay too much money, for an object or service.

It is always helpful when people keep their nose out of other people's business. They do not interfere. The opposite of this is someone who noses around all the time. This kind of person is interested in other people's private matters. He is considered nosey.

Someone who keeps his nose to the grindstone works very hard. This can help a worker keep his nose clean or stay out of trouble.

One unusual expression is that is no skin off my nose. This means that a situation does not affect or concern me. We also say that sometimes a person cuts off his nose to spite his face. That is, he makes a situation worse for himself by doing something foolish because he is angry.

In school, some students thumb their nose at their teacher. They refuse to obey orders or do any work. Maybe these students do not know the correct answers. My mother always told me, if you study hard, the answers should be right under your nose or easily seen.

I think we have explained the nose expressions. What about ears? Well, I hope you are all ears or very interested in hearing more expressions. We might even put a bug in your ear or give you an idea about something. We also advise you to keep your ear to the ground. This means to be interested in what is happening around you and what people are thinking.

If you are a good person, you will lend an ear to your friends. You will listen to them when they have a problem they need to talk about. Our last expression is to play it by ear. This has two meanings. One is to play a song on a musical instrument by remembering the tune and not by reading the music. Play it by ear also means to decide what to do at the last minute instead of making detailed plans.