Update Required To play the media you will need to either update your browser to a recent version or update your Flash plugin.
By Anna Matteo
26 March, 2016


Hello and welcome to Words and Their Stories.

Each week we report on words and expressions commonly used in American English.

Today, we talk about people who can do many things.

Someone with many abilities often is called a "Jack-of-all-trades" or a "Renaissance person."

A "Jack-of-all-trades" is a person who can do many different jobs. "Jack" is an old word for a worker and a "trade" is a kind of job or skill.

A Renaissance man or a Renaissance woman is a little different. This expression deals with a person's education and knowledge, not so much with his or her skills.

The word "Renaissance" comes from Old French and means "rebirth." 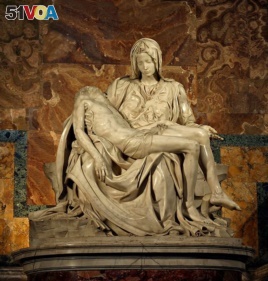 The Renaissance is a period of European history that began in the 14th century. It's a time when Europe began to awaken from the long period known as the Middle Ages.

Classical learning from Ancient Greece and Rome was reborn in many parts of Europe.

During the Renaissance, people became more interested in learning and educating themselves.

The word renaissance can describe anything that is experiencing a rebirth.

Arts, crafts and musical styles often undergo a renaissance. For example, you might say that currently in the U.S. playing the ukulele is experiencing a renaissance.

Many people are learning to play this small, Hawaiian guitar. Used in this way, "renaissance" is not capitalized.

In the U.S, the Harlem Renaissance is an African-American cultural movement of the 1920s and 1930s.

Named after a neighborhood of New York City, this Renaissance celebrated African-American culture, traditions, and ways of life.

However, when talking about people, the term Renaissance man or woman refers to a person who is talented in many areas, especially the arts and sciences. Leonardo da Vinci, Michelangelo and Benjamin Franklin often are called Renaissance men.

Everyone knows about these guys. The names of Renaissance women in history may be less well known. In the past it wasn't as easy for women to get a formal education, even during the "awakening." Also, women were often too busy at home to study up on their science.

But some women did find time.

A German woman named Maria Sibylla Merian (1647-1717) was a Renaissance woman. She spent her life investigating and drawing nature. After her husband died, she and her daughters traveled to Paramaribo, the capital of Suriname. For two years, they observed insects, birds, reptiles and amphibians.

Her book titled "The Metamorphosis of the Insects of Suriname," showed Europeans for the first time the great diversity of the South American rain forest.

Actress Hedy Lamarr is shown in this 1946 photo. She was also a patented inventor. (AP Photo)

A more recent example of a Renaissance woman is the Austrian Hedy Lamar.

During the 1930s and 1940s, Lamar was one of Hollywood's biggest movie stars. She was also an inventor.

During the Second World War, she created a way to protect radio communications from enemy troops. Her method switched radio frequencies in a preprogrammed pattern.

While the Navy did not use the technology, other inventors built upon her idea. Eventually, the U.S. government did use frequency hopping as do many telecommunications companies today.

Lamar once said she hated being known for her beauty and not her mind – a problem Renaissance men like da Vinci and Franklin most likely did not have to face.

Do you have a favorite Renaissance woman or man? Do you have a similar word in your language? Let us know in the Comments Section.

Anna Matteo wrote this piece for VOA Learning English. Mario Ritter was the editor. Playing at the end is Italian Renaissance music.