Update Required To play the media you will need to either update your browser to a recent version or update your Flash plugin.
By Jonathan Evans
25 February 2020


People who survive cancer during childhood and early adulthood are more likely to experience severe, life-threatening health problems later on in life. In fact, many of the survivors die before other people the same age.

Those are findings from a recent study. A report on the study was published this month in The Lancet Oncology.

Researchers followed almost 12,000 young cancer survivors and about 5,000 of their siblings for about 20 years. All of these relatives were said to be in good health. 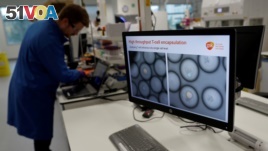 The cancer survivors were free of the disease for at least five years at the start of the study. Yet they were still about six times more likely to die during the follow-up period than their siblings.

Henderson is director of cancer survivorship at the University of Chicago's Comprehensive Cancer Center. She said that doctors need to put more effort into learning the long-term side effects of cancer treatment. The Reuters news agency reported her comments.

Better survival chances also mean children may have a higher risk of developing health problems as a result of tumors or cancer treatments. The problems include heart disease, old cancers returning or possible new cancers.

Many doctors turn to chemotherapy to treat cancer patients. They use drugs to stop the growth of cancer cells, either by killing the cells or by stopping them from dividing.

Yet chemotherapy can weaken the heart muscle and some newer targeted medicines increase the risk of heart failure. So says the American Heart Association. The group also notes that radiation can cause heart rhythm disorders and structural damage in blood vessels and heart valves.

However, survivors of childhood cancer were less likely to die from returning tumors than survivors who were diagnosed a little later.

Researchers followed people diagnosed with cancer between 1970 and 1999. They found that it is possible that long-term results might be better for people diagnosed today because of better treatments. The researchers said that is partly because of changes designed to improve survival chances and decrease the risk of severe treatment-related health problems.

One limitation of the study is that researchers lacked information on three kinds of cancer: tumors in the gonads, thyroid, and skin. Those three make up about 40 percent of cancers discovered in 15-to 20-year-olds.