A Sneaky Way to Put Bugs on the Menu

Update Required To play the media you will need to either update your browser to a recent version or update your Flash plugin.
Jessica Berman
January 18,2016


Running out of cooking oil or need some dressing for your salad? The solution may be crickets from your backyard! Scientists are turning insects into a source of edible and healthy oil.

Even though insects are a delicacy in some parts of the world, to many people, the thought of eating them is downright disgusting.

“In the Western countries, there is no culture of eating entire insects, so then the idea is to use the protein in powder as an ingredient, so then people might tend to receive better this protein, [even] if they cannot see it,” said researcher Daylan Tzompas-Sosa, Wageningen University, Netherlands. “There are many uses for the oil in general, but we are investigating the use of these oils for a food, as a food ingredient.”

The Mexican researcher, working in the Netherlands, said insects are a great source of heart healthy omega-3 fatty acids.

Fish are the main source of omega-3 oils, but environmentalists say over-fishing is depleting the oceans.

Bugs as a food source

Backing up the increased reliance on insects is the United Nations Food and Agriculture Organization. In a 2013 report, the UN agency endorsed the cultivation of bugs as a food source, saying it’s environmentally-friendly and could boost the world’s food production. 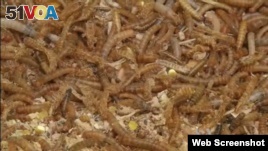 Even though insects are a delicacy in some parts of the world, to many people, the thought of eating them is downright disgusting.

Insects require little food to grow and experts say they yield more meat per kilogram than other protein sources. And there’s no shortage of protein-rich creepy crawlies, which also contain fat, vitamins, fiber and minerals.

But not all insects produce good oil. Cockroaches don't.

The bug oils must be tested to make sure they are safe to consume. But getting over the “ick factor” may be a bigger challenge.