Update Required To play the media you will need to either update your browser to a recent version or update your Flash plugin.
William Eagle
June 03,2015


Nigerian president Muhammadu Buhari took the oath of office last week. Many Nigerians have high expectations for the new government. Among its challenges are kick-starting the economy, reducing unemployment and ending the threat of Islamic terrorist group Boko Haram.

Many observers say accomplishing these tasks means reigning in corruption and mismanagement.

Corruption is blamed for many of the country’s woes – including erratic electricity and fuel supplies. The Nigerian press says the country – which is one of the world's largest oil producers – generates less than four thousand megawatts of power per day, compared to 40 thousand for South Africa and 110,000 for Brazil. With the country’s four state-owned oil refineries working at a fraction of their capacity, Nigeria spends billions of dollars importing fuel for cooking, for automobiles and for running power generators for industry. It also spends billions in subsidies to make fuel affordable to consumers.

Efforts by past presidents to curb corruption and theft and modernize the energy sector have not yielded significant results for consumers and businesses. The chief of the navy is quoted as saying more than $2 billion dollars’ worth of petroleum is stolen each year. And the recent drop in the price of global oil has meant that the government has less revenue for building and maintaining infrastructure. 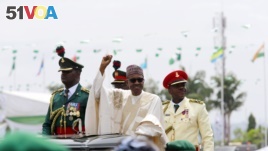 Former president Goodluck Jonathan has called on President Buhari not to limit any corruption investigations to his administration, since he says the problem has been present in all past governments, both military and civilian.

Buhari has said he will not go on what he called a “witch-hunt” of prior administrations on corruption charges, and the Nigerian media says Buhari’s campaign assured President Jonathan he personally will not be investigated.

But political analyst Darren Kew says it will be hard not to look into the past – because many established politicians continue to benefit from government mismanagement and corruption networks in the oil industry. Kew is associate professor of conflict resolution at the University of Massachusetts (Boston) and the director of the university’s Center for Peace, Democracy and Development.

"[Most] of the Jonathan administration power holders in some way, shape or form have continuing vested interests in a lot of illicit trade around the oil industry, and with connections to government contracts," he said. "All the government sponsored corruption in the past is still very present and a lot of these networks are going to trace back to powerful individuals in the Jonathan administration and further back. So it is going to be a minefield for President Buhari in terms of how many powerful individuals he can go after and how soon."

Kew said members of the National Assembly, now controlled by the ruling All Progressives Congress (APC) party, also benefit from the system, and could try to stop any reforms.

"A lot of these powerful politicians or their protégés are in the National Assembly, and it has powers to check those of the presidency," he said. "I’d expect a lot of the new [legislators] like the past ones will expect what they call “recouping their investment” in the campaign with kickbacks, paybacks to pay what they owe and build a new war chest to continue their power holding. So there is going to be a showdown with the National Assembly at some point over these anti-corruption efforts. Going after the big politicians may take a back seat."

But Kew said it’s still possible to send a strong signal that corruption will not be tolerated, even by some of the country’s long-established elites.

"A lot of these powerful politicians have front men who launder money for them and take care of the books; many are well known to be connected to particular politicians," he said. "Buhari can go after those individuals rather than the biggest politicians with a not-so-subtle message to kingpins behind these individuals."

Besides corruption in government agencies, Buhari has also indicated he is willing to tackle the lack of accountability by state and local governments that rely on revenues from the central government.

Patrick Smith, the editor of the influential publications Africa Confidential and Africa Report, says governors of states enjoy wide powers. And a few states (like Rivers, Lagos and Kano) have budgets larger than many African economies.

"Buhari is saying they are going to have to take a very close look at government’s overall commitments to the country at national, state and local government levels and be very careful what goes out," said Smith. "The governors are going to find that their own funds are going to be much more carefully monitored and closely rationed. Buhari has also made clear he is not going to run up the country’s debts simply to finance state governments -- there will be a generalized crackdown on state [and local] expenditure."

"So the message," he continued, "is tougher financial management, better regulation, and better surveillance on how the money is spent; and getting the best value for money for Nigerian citizens."

Smith said the ruling APC met recently in Abuja to discuss government reforms. One of leading spokesmen was the governor of Kaduna State, Nasir el-Rufai.

"He was emphasizing that it may not sound very glamorous," he said, "but if this government is going to succeed, they are going to need a very determined attitude to reform the public and civil service, and those are all the power companies, the Nigerian National Petroleum Corporation, the water and power companies, the regulatory authorities and also the judiciary and so on."

"The message," he said, "was we’ve got plenty of great policy ideas, but unless we re-establish the rule of law – by reform of the public service and restructuring the police and judiciary, we are not going to be able to achieve our policy objectives."

Patrick Smith, Darren Kew and other observers say Buhari’s management style is to set overall goals, but not to micromanage. In this model, cabinet ministers are given full backing to achieve results. In the past, said Kew, political appointments have been tasked to do nothing about corruption or to cover up the problem. He said Buhari could name a strong attorney general to tackle the issue, and unleash Nigeria's powerful anti-corruption agencies.
Smith said Buhari could also beef up the responsibilities of his vice president Yemi Osinbajo – a former professor of law who has been praised for his work as Commissioner for Justice in Lagos State. Osinbajo would help run the government and coordinate the various government departments.

Smith notes that both Osinbajo, a Pentecostal pastor, and Buhari, known as a pious Muslim, are moral figures with strong anti-corruption credentials. Observers say they could make a formidable team in reversing decades of waste and mismanagement. But Smith says expectations are high, and the new administration’s so-called honeymoon with the public may be short.