Update Required To play the media you will need to either update your browser to a recent version or update your Flash plugin.
By VOA
Aug 12, 2018


Ethiopia has been suffering the effects of a devastating series of droughts, which began three years ago when the El Niño weather pattern caused higher temperatures in this country of 100 million people. While an above average rainy season this year is expected to help improve agriculture in parts of the country, the damage done by several consecutive failed rainy seasons has been significant, resulting in widespread crop failures and devastating loss of livestock and leading to successive humanitarian disasters.

Further compounding the situation is a large-scale displacement of approximately one million people since April in the West-Guji and Gedeo zones of the Oromiya Region and Southern Nations, Nationalities, and Peoples Region, respectively. This newly displaced populations is in addition to the 1.6 million

Ethiopians already pushed from their homes by conflict or drought, with large-scale displacement occurring along the border of the Oromiya and Somali regions, who need immediate, vital humanitarian assistance. Today, as a result of these conditions, nearly 8 million are facing hunger, particularly in Oromiya and southern Somali regions. 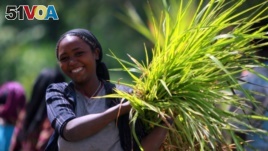 In late July, the U.S. Agency for International Development, or USAID, announced an additional 170 million dollars in humanitarian assistance to support the people of the Federal Democratic Republic of Ethiopia.This new funding brings the total U.S. humanitarian contribution for Ethiopia to more than 802 million dollars since October 2016.

The funds will go toward emergency food and nutrition assistance, life-saving medical care, shelter, and safe drinking water, as well as programs to improve sanitation and hygiene programs to stop the spread of preventable diseases. This assistance will provide vital humanitarian aid to millions of Ethiopians trying to recover from the shocks suffered since 2016, as well as to refugees who are seeking shelter in Ethiopia.

“This assistance will meet the immediate needs of those displaced, keeping them healthy so that they can return home safely and voluntarily, resume productive lives, and participate in the process of addressing the root causes of the conflict,” said USAID Mission Director to Ethiopia, Leslie Reed.

The United States urges additional contributions from the Government of Ethiopia and for the community of nations to meet the needs of vulnerable Ethiopians.