Update Required To play the media you will need to either update your browser to a recent version or update your Flash plugin.
By VOA
Dec 21, 2017 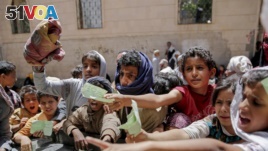 The United States has announced an additional $130 million dollars in emergency food assistance to Yemen through the U.S. Agency for International Development, known as USAID. This brings the total U.S. contribution in humanitarian aid for the people of Yemen to nearly $768 million since October 2016.

The deteriorating humanitarian situation in Yemen is a matter of grave concern for the United States. More than 22 million Yemenis are in dire need of assistance with more than 8 million on the brink of famine, according to the United Nations. The country has been brought to this state because of the conflict that began in 2015, when Houthi rebels, supported by Iran, seized the capital of Sanaa and drove the internationally recognized government into exile. At the request of the Yemeni Government, a coalition led by Saudi Arabia began airstrikes on rebel positions to stop their expansion.

Not enough critically needed supplies are reaching the suffering Yemeni people. The United States has repeatedly called on the Saudi-led military coalition to facilitate the free flow of humanitarian aid and commercial imports to all of Yemen's ports and through Sanaa airport. USAID Administrator Mark Green noted that the small amount of goods that Saudi Arabia has let into Yemen so far is not nearly enough to address the tremendous need. In addition to urging Saudi Arabia to allow humanitarian aid to reach all points where it is needed, the White House has called on the “Iranian-backed Houthi militias [to] allow food, medicine, and fuel to be distributed throughout the areas they control, rather than diverted to sustain their military campaign against the Yemeni people.”

The United States urges all parties to the conflict in Yemen to immediately cease hostilities, reenergize political talks, and end the suffering of the Yemeni people. As White House Press Secretary Sarah Sanders said in a press statement earlier this month, “The United States continues to believe that the devastating conflict in Yemen and the suffering it causes must be brought to an end through political negotiations in accordance with relevant United Nations Security Council resolutions. Successful political negotiations are necessary to ensure that Yemen can flourish, free of the malign influence of Iranian-backed militias operating outside the structures of the state.”