Update Required To play the media you will need to either update your browser to a recent version or update your Flash plugin.
By VOA
Jan 31, 2018


With a growing U.S. economy and a surging stock market at his back, President Donald Trump told leaders at the World Economic Forum that “America is open for business, and we are competitive once again.”

He noted that recently passed U.S. tax cuts and reforms are expected to raise the average American's household income by more than $4,000 dollars. The corporate tax rate was lowered from 35 to 21 percent, and a significant number of American companies are passing on bonuses to their workers in amounts as large as $3,000 dollars. The world's largest company, Apple, announced plans to bring $245 billion dollars in overseas profits home to America. 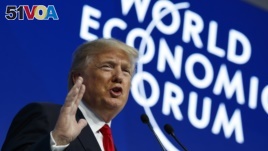 Eliminating unnecessary, burdensome regulations is also a key factor, he said, in creating an environment “that attracts capital, invites investment, and rewards production.”

President Trump encouraged his audience “to come to America, where you can innovate, create and build.”

But the President emphasized that his mission to “put America first...does not mean America alone:”

“When the United States grows, so does the world. American prosperity has created countless jobs all around the globe, and the drive for excellence, creativity and innovation in the U.S. has led to important discoveries that help people everywhere live more prosperous and far healthier lives.”

President Trump said that in order to have broadly shared prosperity, however, the international trading system must be reformed:

“We cannot have free and open trade if some countries exploit the system at the expense of others. We support free trade, but it needs to be fair and it needs to be reciprocal. Because, in the end, unfair trade undermines us all.”

President Trump pointed out that prosperity is impossible without security. That is why the United States is making historic investments in the American military and why it is asking friends and allies to invest in their own defenses and meet their financial obligations, in order to “make the world safer from rogue regimes, terrorism and revisionist powers.”

“We are all stronger when free, sovereign nations cooperate toward shared goals and...shared dreams,” President Trump declared. “So together, let us resolve to use our power, our resources, and our voices, not just for ourselves, but for our people – to lift their burdens, to raise their hopes, and to empower their dreams; to protect their families, their communities, and their futures.”