Yet Another Cowardly Attack by the Taliban

Update Required To play the media you will need to either update your browser to a recent version or update your Flash plugin.
By VOA
Jan 26, 2018


Late on the evening of January 20th, several well-dressed men finished their dinner in the restaurant of the Kabul Intercontinental Hotel, got up from their chairs, took out assault rifles and started shooting people. They then charged through the hotel's corridors, specifically looking to kill foreigners and officials of the Afghan government.

The siege finally ended some 17 hours later, when Afghanistan's security forces, with support from Norwegian troops, killed the six terrorists. By that time, at least 22 people had been murdered by the attackers. The victims came from many countries — Ukraine, South Africa, Germany, Greece, Kazakhstan, Venezuela, the United States, and, of course, Afghanistan. 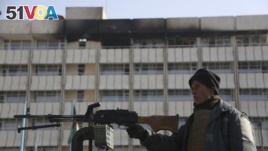 An Afghan police officer stands guard in front of the Intercontinental Hotel in Kabul, Afghanistan. (File)

This attack is part of a now-familiar pattern. Over the past several months, the Taliban have been attacking cafes, hotels, and restaurants—anywhere that Afghan citizens could meet and speak with foreign visitors. The Taliban are focused on isolating Afghanistan and its citizenry from the rest of the global community, using egregious violence in an attempt to impose on them their twisted ideology. The Taliban deny the people of Afghanistan a life of peace and the opportunity to build a better community, a more comfortable life.

“The United States strongly condemns [the] attack at the Intercontinental Hotel in Kabul,” said Secretary of State Rex Tillerson in a written statement.

“We mourn all those who lost their lives in the attack, whether Afghans or citizens of other countries.We offer our deepest condolences to the families and friends of those who were killed and wish for the speedy recovery of those wounded.

“The United States applauds the Afghan National Defense and Security Forces for their bravery in responding to the attack. We are in contact with Afghan authorities regarding their investigation of the incident.We have seen the Taliban's claim of responsibility and condemn terrorist groups for their violent campaign against Afghan and foreign personnel working to improve Afghanistan,” said Secretary Tillerson.

“The United States stands with the government and people of Afghanistan.We remain firmly committed to supporting Afghan efforts to achieve peace, security, and prosperity for their country.Violence like what we witnessed [in Kabul] has no place in Afghanistan, or anywhere else in the world.”