President Donald Trump recently welcomed Kazakh President Nursultan Nazarbayev to the White House, where he noted that Kazakhstan has made great strides since gaining independence in 1991.

In the years since Kazakhstan's independence, the United States and Kazakhstan worked together to rid Kazakhstan of nuclear weapons and secure dangerous radiological materials. Kazakhstan continues to be a valued partner in nuclear non-proliferation. Presidents Trump and Nazarbayev discussed efforts to achieve a Korean peninsula free of nuclear weapons. 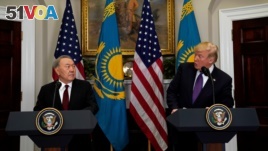 “Together,” said President Trump, “we are determined to prevent the North Korean regime from threatening the world with nuclear devastation.”

President Trump also thanked President Nazarbayev for his assurances that Kazakhstan will continue to provide critical access for supplies and equipment used by U.S. troops fighting ISIS and the Taliban in Afghanistan.

American businesses are currently among the largest investors in Kazakhstan, particularly in the energy sector.The U.S. supports Kazakhstan's efforts to become a top 30 global economy by 2050. That includes working to improve Kazakhstan's business environment, which will create new opportunities for American companies operating there, and provide additional jobs in both countries.

President Trump stressed the importance of fair and reciprocal trade for both countries. The United States values Kazakhstan's participation in the Central Asia Trade Forum and in the Central Asia Trade and Investment Framework Agreement. Both countries are working together to bring U.S. products and services to the Kazakhstani people across a range of industries, including commercial aircraft, railways, medical services, technology, and energy.

“Working in common cause, we can advance greater opportunity for citizens in both of our countries,” said President Trump.

“We want a strong, sovereign, and thriving future for Kazakhstan, and for the peace-loving nations of the world.”