Update Required To play the media you will need to either update your browser to a recent version or update your Flash plugin.
By VOA
Jan 22, 2018


The United States will maintain a military and diplomatic presence in Syria in order to help achieve a stable, unified and independent Syria, said U.S. Secretary of State Rex Tillerson.

Now Syria remains a source of severe strategic and diplomatic challenges. The United States, he declared, will maintain a military deployment to ensure the lasting defeat of ISIS and al-Qaida. More broadly, the United States will remain engaged, he declared, to protect our security interests, which require several outcomes in addition to the enduring defeat of ISIS and al-Qaida: the resolution of the conflict between the Assad regime and the Syrian people through the UN-led political process prescribed in Security Council Resolution 2254, leading to a post-Assad leadership that can run a functioning state; conditions that allow refugees and internally displaced persons to begin safely returning to Syria; a Syria free of weapons of mass destruction; and the diminishment of Iranian influence in Syria. 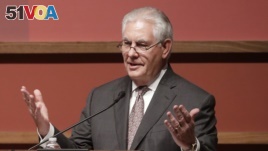 U.S. Secretary of State Rex Tillerson speaks to the Hoover Institution at Stanford University in Stanford, Calif., Wednesday, Jan. 17, 2018. Tillerson says it's crucial for the U.S. to maintain a military presence in Syria to prevent the Islamic State group's resurgence. (AP Photo/Jeff Chiu)

Secretary Tillerson pointed out that the Iranian regime, has long dreamed of creating a northern arch stretching from Iran to Lebanon and the Mediterranean. To that end, it has dramatically strengthened its presence in Syria though the deployment of IRGC troops and support for Hezbollah and other proxies:

“Through its position in Syria, Iran is positioning to continue attacking U.S. interests, our allies, and personnel in the region. It is spending billions of dollars a year to prop up Assad and wage proxy wars at the expense of supporting its own people.”

If the United States were to disengage from Syria, Iran would be given the opportunity to further strengthen its position. “As a destabilized nation and one bordering Israel, Syria presents an opportunity that Iran is all too eager to exploit,” Mr. Tillerson said.

The U.S. plans to help stabilize Syrian territory liberated from ISIS and assist in setting the conditions conducive to the implementation of the UN-led political process. This will support the establishment of a democratic Syrian government not under the control of Assad, which would go a long way toward reducing and expelling malicious Iranian influence from Syria.

“A stable, unified, independent Syria will serve the national security of the United States, its allies, and our partners, said Secretary Tillerson. “If that reality can come to pass it will be a victory for all, and it will support the ability of the Syrian people to pursue their own God-given rights of life, liberty and the pursuit of happiness.”