Update Required To play the media you will need to either update your browser to a recent version or update your Flash plugin.
By VOA
Jun 16, 2017


The United States government announced sanctions against two ISIS terrorists who are responsible for the financing, manufacture and distribution of the group's chemical weapons.

The 6-month long offensive by the Iraqi army against the ISIS-held city of Mosul has been remarkably successful. With support from the U.S.-led Global Coalition, Iraq's armed forces have made steady progress in clearing the city of ISIS militants. 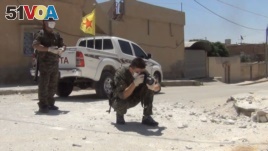 A YPG fighter is collecting pieces of ISIS mortar with chemical gas in Hasaka.

Likewise in neighboring Syria, U.S.-backed Syrian Democratic Forces and their Syrian Arab Coalition partners have made good headway in chasing ISIS out of much of the territory the terrorists have seized in northern Syria, and today the Syrian forces are knocking on the gates of Raqqa.

In a desperate attempt to stem the losses, over the past several months, ISIS has repeatedly used chemical weapons in both Syria and Iraq, including against civilians.

As part of an effort to deny ISIS the ability to access funds and materials it needs to produce these weapons, the U.S. State Department tagged as a Specially Designated Global Terrorist, Marwan Ibrahim Hussayn Tah al-Azawi. At the same time, the Treasury Department attached the same designation to Attallah Salman, better known as Abd Kafi al-Jaburi. Both men were designated under Executive Order 13224, which imposes sanctions on persons who have committed, or are deemed to pose a significant risk of committing, acts of terrorism.

Marwan Ibrahim Hussayn Tah al-Azawi is an Iraqi ISIS leader connected to this terrorist group's development of chemical weapons for use in ongoing combat against Iraqi Security Forces.

In 2016, Abd Kafi al-Jaburi was the ISIS chemical weapons and explosives manager located in the Kirkuk Province of Iraq. In January, he was transferred to work on a chemical weapons project to be used by ISIS against Peshmerga forces in future attacks.

The designations of al-Azawi and al-Jaburi are the first to target ISIS operatives involved in chemical weapons development. The United States condemns in the strongest possible terms the use of chemical weapons by any actor, and will use all available tools to target those complicit in their development, proliferation, or use.