Update Required To play the media you will need to either update your browser to a recent version or update your Flash plugin.
By VOA
Jun 11, 2017


On June 5th, Montenegro became the 29th member of the North Atlantic Treaty Organization, or NATO. The United States congratulates Montenegro on its ascent into the ranks of the great international alliance.

Montenegro, one of the countries that arose from the break-up of Yugoslavia, is a small country of just under 14,000 square kilometers [13,812 km2, or 5,333 sq mi] and a population of about 680,000. Yet since it declared its independence in 2006, it has sought to integrate itself into the international community, and to contribute to common security efforts. 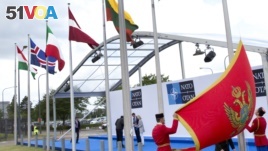 Soldiers from Montenegro unfurl the national flag during a ceremony to mark the accession of Montenegro at NATO Headquarters in Brussels on Wednesday, June 7, 2017.

“Montenegro has been a reliable partner and force provider to NATO, the EU, and UN missions. It has contributed to NATO's operations in Afghanistan for six years and contributed over $1 million in the last two years towards the sustainability of Afghan security forces,” said Under Secretary for Political Affairs Thomas Shannon at the ceremony for Montenegro's Accession to the North Atlantic Treaty. Montenegro has also contributed to the 67-member coalition to defeat ISIS.

Since 2009, NATO and Montenegro have worked closely together through the Membership Action Plan, which helps nations prepare for possible future membership. Secretary General Jens Stoltenberg said Montenegro was invited to join NATO due to its “unwavering commitment to our common values and to international security.”

“NATO's strength is based on not only on its military might,” said Shannon, but also on our allies' shared commitment to the fundamental values enshrined in the Washington Treaty, democracy, individual liberty, and the rule of law. Montenegro's accession also affirms to other aspiring members that NATO's doors remain open to those countries willing and able to make the reforms necessary to meet NATO's high standards, and to accept the risks and responsibilities as well as the benefits of membership. Montenegro's accession is an important stepping stone toward our vision of a Europe whole, free, and at peace.”