Update Required To play the media you will need to either update your browser to a recent version or update your Flash plugin.
By VOA
Jun 8, 2017


On June 8th, much of the world observes United Nations World Oceans Day. The idea is to remind people how important the world's oceans are to all life on Earth, to celebrate their beauty, and to bring attention to the impact human activity has on the oceans. This year, the theme is “Our Oceans, Our Future”, with special emphasis on finding solutions to plastic pollution, and preventing marine litter for a healthier ocean and a better future.

The world's oceans cover nearly three fourths of the Earth's surface, and contain 97 percent of our planet's water. They produce over half of our oxygen, help regulate our climate, absorb carbon dioxide, and support the greatest abundance of life on our planet. Nearly half of all species on Earth depend on the oceans for survival, and for many of the rest, including for people, the oceans improve the quality of life. 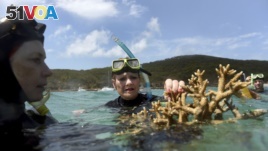 The oceans are also indispensable to the world's economy, because they are key to transportation and recreation. And inasmuch as over 95 percent of the underwater realm remains unexplored, it is nearly a certainty that their depths may hold the cure to many a disease, the resolution to many a problem.

And yet, as much as 40 per cent of the world's oceans are heavily affected by human activities that result in pollution, over-fishing, and loss of coastal habitats. Of particular concern is plastic debris. Some of it comes from ships that ply our rivers, lakes and seas, and eventually makes its way into the ocean. But about 8 million metric tons of plastic waste washes off land into the ocean each year.

Once there, it begins to break down until it turns into small fragments known as microplastics. Plastics are a serious threat, because they degrade very slowly, entangle sea creatures, damage habitats like coral reefs, and are ingested by marine animals. Researchers have documented impacts of plastic on over 650 different marine species – including sea turtles, seals, whales, dolphins, porpoises, seabirds, and fish.

On World Oceans Day, we must remember that the health and safety of our oceans is our collective responsibility, one that we cannot afford to neglect. Only through good stewardship can we safeguard the health of our oceans, and ensure that the oceans continue to meet the needs of future generations.