Update Required To play the media you will need to either update your browser to a recent version or update your Flash plugin.
By VOA
May 30, 2017


As the world has grown increasingly interconnected, fast-evolving technologies, globalization, and trade liberalization have all but removed many traditional barriers to free movement of goods and people, and facilitated rapid transnational business, trade, and banking transactions. 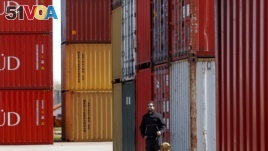 An Argentina tax official and his sniffer dog are shown by containers loaded with grains at the port in Argentina. (File)

Transnational crime is tremendously lucrative. According to a number of international organizations, the illegal economy accounts for 8 to 15 percent of the world gross domestic product. And nowhere are these criminal networks more active than in sub-Saharan Africa, said David Luna:

This fact has not escaped terrorist organizations. Indeed, “Today's thriving illegal economy is so lucrative that terrorists are increasingly turning to criminal activities to fund their violent campaigns such as those that we are witnessing today by al-Qaeda in the Islamic Maghreb, [also known as] AQIM, Boko Haram, al-Shabaab, and others,” said David Luna.

So for example, in the Sahel and the Maghreb, AQIM finances its terror campaigns by collecting a tax on drugs passing through territory under its control. AQIM and ISIS, both of whom are involved in smuggling and trafficking in person, are attempting to build alliances with violent extremist networks in Libya and across the Maghreb, Sahel, and West Africa.

In reality, “There is no region, no country and no community who remain untouched by the destabilizing effects and corruptive influence of transnational organized crime and violent terrorism,” said Mr. Luna.

The United States is “Committed to strengthen international cooperation in support of our U.S. law enforcement and security agencies, and the capacities of our allies and partners in Africa to disrupt and dismantle transnational organized criminals.”