Update Required To play the media you will need to either update your browser to a recent version or update your Flash plugin.
By VOA
May 31, 2017


After a recent meeting in Washington between top U.S. and Mexican officials, both sides emphasized the need for a shared strategy to work together in the fight against transnational organized crime, particularly related to drug trafficking.

Secretary of State Rex Tillerson stressed that the United States must own up to the fact that “we are the market. There is no other market for these activities...But for us, Mexico wouldn't have the trans-criminal organized crime problem and the violence that they're suffering.”

U.S. Homeland Security Secretary John Kelly said the most important thing the United States can do is reduce the drug demand. He praised the bravery of the Mexican military and police, many of whom have died in the fight against the drug cartels. He noted the cartels' incredible brutality: “If you won't take their bribe, they'll kill your daughter and make their point that way.”

Secretary of State Tillerson said that in their meeting with Mexican Secretary of Foreign Relations Luis Vidgaray Caso and Mexican Secretary of Government Miguel Angel Osorio Chong, the delegations “identified fresh strategies to attack the business model of these multi-billion dollar criminal organizations,” including targeting “their means of production, their cross-border distribution networks, their cash flow and their weapons procurement.” The two sides also discussed improving information-sharing among law enforcement agencies on both sides of the border, and the best ways for both countries to recognize organizational connections in the criminal drug enterprises, as well the most effective means to bring the guilty to justice. 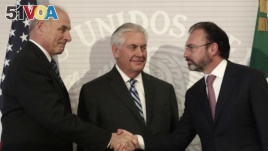 Homeland Security Secretary Kelly spoke of the positive benefits of a physical barrier and the use of technology on the border between the two countries, as well. He added, however, that “it's all about the people that patrol, talk to each other, police actions on both sides of the border. So there's no one single solution to this. It's a multifaceted problem and it needs multifaceted solutions.”

As Mexican Government Secretary Osorio Chong said, the discussions between the U.S. and Mexican officials offered “a good path” to finding such solutions in the fight against drug trafficking.