Update Required To play the media you will need to either update your browser to a recent version or update your Flash plugin.
By VOA
Jun 14, 2017


The six month campaign by the Iraqi army to take back the city of Mosul from ISIS, is coming to an end. The terrorist group captured Mosul and looked toward capturing Baghdad itself, but has since lost most of Mosul to Iraq's armed forces, and is clinging to a handful of pockets within the far Western reaches of the city. It is now just a matter of time before the last ISIS extremists are killed, or chased from the city.

But as they prepare for a last stand, the terrorists are ever more brutal in their treatment of Mosul's civilian population. According to the Office of the United Nations High Commissioner for Human Rights, ISIS has killed over 200 people in the last three weeks. Entire families, including children, have been murdered by the terrorists. Zeid Ra'ad Al Hussein, the High Commissioner for Human Rights said “Shooting children as they try to run to safety with their families: really, there are no words of condemnation strong enough. Clearly these amount to war crimes.”

ISIS has used human shields in the past, and killed people who have tried to leave the city. But now the slaughter and other abuses are escalating. ISIS is locking entire families in basements with no food or water and welding the doors shut, and booby trapping streets and houses with explosives to prevent people from leaving. 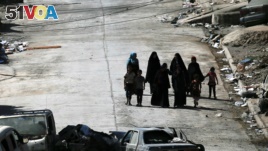 Civilians make their way next to destroyed cars in western Mosul, Iraq June 12, 2017.

“So we are working very closely with the Iraqi Security Forces on the plan to ensure that we defeat the remaining fighters in Mosul while also doing our utmost to protect the civilian life that Daesh is so aggressively trying to take.” said Special Presidential Envoy Brett McGurk.

“But it's a really important reminder of what's happening right now, of the true face of this enemy. They are mass murderers, they are barbaric, they are a threat to all civilization, all humanity, and those civilians in Mosul trapped, being held hostage by Daesh, we will do everything we can in supporting the Iraqi Security Forces to free them.”