The State of Human Rights in Russia

Update Required To play the media you will need to either update your browser to a recent version or update your Flash plugin.
By VOA
Apr 29, 2018


Human rights abuses in Russia continued to be a serious problem in 2017, according to the State Department's Human Rights Report issued in late April. “The Russian Government continues to quash dissent and civil society, even while it invades its neighbors and undermines the sovereignty of Western nations,” said John Sullivan, who was serving as Acting Secretary of State at the report's release.

According to the report, among the most significant human rights concerns during the year were the reports of extrajudicial killings, disappearances, and mass torture of over 100 gay persons in Chechnya. 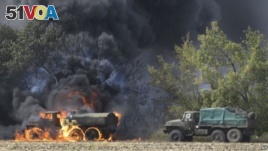 Outside of Chechnya, there were allegations of systematic use of torture by police and prison officials, sometimes resulting in death, and at times including punitive psychiatric incarceration. Prison conditions were reported to be harsh and life-threatening.The government failed to take adequate steps to prosecute or punish most officials who committed abuses, resulting in a climate of impunity.

There was a lack of judicial independence. Authorities detained and prosecuted individuals for political reasons. Political prisoners were quite frequently charged with “terrorism,” “extremism,” “separatism,” and “espionage.”

The government severely restricted freedom of expression by various means, including the use of “antiextremism” and other vague laws to prosecute peaceful dissent; impunity for violence against journalists and bloggers; financial and editorial pressure on independent media outlets; blocking and filtering of internet content and use of cyberattacks to disrupt speech on the internet.

The rights of peaceful assembly and freedom of association were also severely restricted, primarily through implementation of laws on public assemblies, and by falsely labeling civil society organizations “foreign agents” and “undesirable foreign organizations.”

In addition, the Russian government was responsible for many abuses perpetrated on the territory of neighboring Ukraine. In Russian-occupied Crimea, occupation authorities employed various strategies to suppress all forms of dissent, including political prosecutions of opponents of the occupation. Russian-backed forces also committed widespread abuses in Ukraine's Donbas region, including [forced] disappearances and torture.

“We once again urge Russia to end its brutal occupation of Ukraine's Crimean Peninsula,” said Mr. Sullivan, “to halt the abuses perpetrated by Russian-led forces in Ukraine's Donbas region, and to address impunity for the human rights violations and abuses in the Republic of Chechnya.”