Update Required To play the media you will need to either update your browser to a recent version or update your Flash plugin.
Ray McDonald
June 24,2016


We’re turning up the heat with the five most popular songs in the Billboard Hot 100 Pop Singles Chart, for the week ending June 25, 2016.

Summer begins this week in the Northern Hemisphere, which may explain why hardly any songs move in the Top Five…they may just be too hot.

Bucking the trend is Fifth Harmony, sinking a slot to fifth place with “Work From Home.” The women were in Toronto on June 19, closing the 2016 IHeart Radio MuchMusic Video Awards ceremony with just that song. They also won the trophy for Fan Fave International Group while group member Camilla Cabello earned Best Pop Video and Fan Fave Video for her duet with Shawn Mendes, “I Know What You Did Last Summer.” 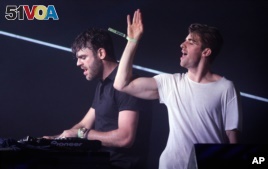 FILE - Andrew Taggart, right, and Alex Pall with the The Chainsmokers performs at the Bonnaroo Music and Arts Festival.

Number 4: The Chainsmokers Featuring Daya "Don't Let Me Down"

I know what The Chainsmokers and Daya did this summer: they hit fourth place with “Don’t Let Me Down.” This song just hit a sales milestone: It just received a platinum certification in the United States, selling at least one million units.

Well, you ask, what is a unit? A unit is equal to one paid download or 150 streams. It’s The Chainsmokers’ third platinum single, following “#Selfie” and “Roses.”

Justin Timberlake continues to relax in third place with “Can’t Stop The Feeling.” This week, Justin honored a friend. On June 20, he took to social media to honor Anton Yelchin. The 27-year-old actor died on June 19, after a freak vehicular accident. Justin and Anton acted together in the 2006 film Alpha Dog.

Holding in second place is Desiigner, with his million-selling debut smash “Panda.” It’s a former chart-topper in the United States, but how’s it doing internationally? It’s doing pretty well, hitting fourth place in Canada and New Zealand, and reaching the Top 10 in Australia, Denmark, Finland, the Netherlands, Portugal, and the U.K.

Meanwhile, not only does Drake continue to command our hit list, he also won a bunch of awards on June 19.

Drake earned five wins at the IHeart Radio MuchMusic Video Awards in his hometown of Toronto, Canada. Although he was the night’s biggest winner, Drake wasn’t there to pick up the trophies: he was in the Dominican Republic, shooting a video with French Montana.

That’s it for now, but come back in a week and we’ll do it all over again!