Boris Johnson on Wednesday is set to take over Britain's governing Conservative Party and become the country's next prime minister.

Johnson is a strong supporter of Britain's exit from the European Union. He replaces Theresa May. She announced her resignation two months ago following several failed efforts to reach a deal to lead her country out of the EU, a process also known as Brexit. 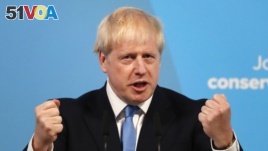 Boris Johnson speaks after being announced as the new leader of the Conservative Party in London, Tuesday, July 23, 2019. (AP Photo/Frank Augstein)

Johnson is one of Britain's most famous and controversial politicians. He was a newspaper reporter and, later, the mayor of London. He also served as Britain's foreign secretary.

Johnson defeated Jeremy Hunt in the Conservative leadership contest. He won two-thirds of the votes among about 160,000 party members across Britain.

In a short speech to hundreds of party members and lawmakers, Johnson promised to "deliver Brexit, unite the country and defeat Jeremy Corbyn." Corbyn is the leader of the opposition Labour Party.

U.S. President Donald Trump tweeted his congratulations and said he will be "great." Trump has praised Johnson in the past.

Trump has been critical of May's inability to reach a Brexit deal. He has said Johnson will do a better job.

May stepped down after Parliament repeatedly rejected the Brexit agreement she struck with the 28-nation European Union.

Conservatives supported Johnson after he promised to succeed where May had failed. He told voters he would lead Britain out of the EU by October 31, even if there is not a deal.

Johnson said he can get the EU to renegotiate the deal it made with May, something the EU says it will not do.

Economists and financial leaders fear that a no-deal Brexit could take Britain into recession. They also fear big problems with international trade. These fears have pushed down the value of British money, the pound.

Carolyn Fairbairn is the director of the Confederation of British Industry. She said there must be a Brexit deal.

"On Brexit, the new prime minister must not underestimate the benefits of a good deal," she said.

In 2016, Johnson played an important part in the EU referendum campaign. He popularized the false claim that Britain sends the EU $440 million a week. He argued that money should instead be used for the British health service.

Britain sends about half the amount of money Johnson claimed.

After May became prime minister, she made Johnson the foreign secretary. He made several mistakes during his two years in the position, such as suggesting Libyan officials should "clear the dead bodies" out of the destroyed city of Sirte to make it a shopping center. He quit the government in 2018.

Many Conservative Party members believe Johnson can deliver on Brexit. Critics say he is a Trump-like leader and someone who uses racist language to get support.

British lawmakers begin their six-week summer break on Friday. They return to work in September. Johnson will then begin the fight for his plans.

Johnson will be the leader of a House of Commons whose members are mostly against leaving the EU without a deal. They and others plan to resist any push for a no-deal Brexit.

The Reuters News Agency and the Associated Press reported this story. Susan Shand adapted it for VOA Learning English. Ashley Thompson was the editor.

exit – v. to go out of a place or situation

replace – v. : to put someone or something new in the place or position o

mayor – n. an official who is elected to be the head of the government of a city or town

benefit – n. the good of something

referendum – n. a public vote on a particular issue