Update Required To play the media you will need to either update your browser to a recent version or update your Flash plugin.
By Bryan Lynn
15 July 2020


Comets are solar system objects made up of ice, rock and dust. Right now, a newly-discovered one is speeding by Earth, providing excellent light shows for the planet's people.

The ice-rock is called Neowise. It is the brightest comet to appear above the Northern Hemisphere in 25 years. Social media users in many countries have posted images they captured of Neowise, as it lit up the sky over their heads.

Comets are normally about 8 to 16 kilometers wide. But, as they travel near the sun, they heat up, releasing gas and dust. The comet expands to form a "glowing head that can be larger than a planet," says the U.S. space agency NASA. The process also creates a sunlit "tail" of dust. It can stretch for millions of kilometers behind the comet.

Scientists say Neowise is believed to be about 5 kilometers across. It passed inside Mercury's orbit on July 3, NASA's Jet Propulsion Laboratory said in a statement. The close pass by the sun was "cooking" the comet's outermost parts, causing a major release of gas and dust material. "And yet the comet has managed to survive this intense roasting," the statement said. 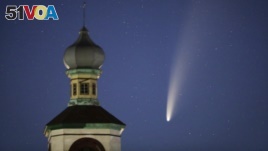 The comet was named for NASA's NEOWISE infrared space telescope, which discovered it in March. The NEOWISE project aims to search the skies for what scientists call near-Earth objects, or NEOs. Such objects include asteroids and comets that could come within 50 million kilometers of Earth's orbit.

In this case, NASA said Neowise would pass by Earth "at a harmless distance of 103 million kilometers," while giving astronomers a good chance to study its substance and structure.

Sky watchers may be able to see Neowise as it passes through the inner solar system. But "its nearness to the sun" could make sighting it difficult, NASA says.

Experts say people in the Northern Hemisphere - the part of Earth above the equator - should look toward the northwestern sky, just below the "Big Dipper" star group.

Until recently, the best time to see Neowise was about an hour before sunrise. This week, the comet began making its appearance in the evening sky shortly after sunset.

People have been able to see the head of the comet without the use of equipment. But devices like binoculars and telescopes are better for viewing the comet's long tail.

Neowise is expected to be seeable across the Northern Hemisphere until mid-August. It will then start making its way back to the outer parts of the solar system.

NASA says it will be about 7,000 years before the comet returns. "So I wouldn't suggest waiting for the next pass," said Joe Masiero of NASA's Jet Propulsion Laboratory.

Astronauts on the International Space Station caught a good look at the bright ice-rock last week. NASA's Bob Behnken captured an image of Neowise and shared the picture on social media.

It shows central Asia in the background, and part of the space station in the foreground. "Stars, cities, spaceships, and a comet!" Behnken tweeted from orbit.

Bryan Lynn wrote this story for VOA Learning English, based on reports from The Associated Press and NASA. Caty Weaver was the editor.

tail – n. the back part of something long

roast – v. to cook or dry with heat

view – v. to look at something