Update Required To play the media you will need to either update your browser to a recent version or update your Flash plugin.
By John Russell
14 July 2020


China, the United Arab Emirates and the United States plan to launch unpiloted spaceships in the next few weeks to fly to Mars. The operations are aimed at searching for signs of ancient, microscopic life. Each country hopes the research will help them learn if astronauts could someday visit the red planet.

The spaceships are expected to reach Mars in February after traveling about 485 million kilometers. Scientists want to find out what Mars was like billions of years ago, when it had rivers, lakes, and oceans.

Ken Farley is a professor at California Institute of Technology and a project scientist for Perseverance, the U.S. rover that will go to Mars. He noted how hard it is to confirm that life existed on another planet. There is "a very big burden of proof," he said. 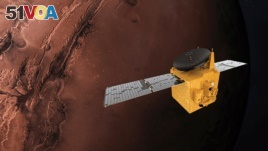 This June 1, 2020, rendering provided by Mohammed Bin Rashid Space Centre shows the Hope probe. The U.S., China and the United Arab Emirates are sending spacecraft to Mars in quick succession beginning this week.

It is not by chance that the three launches are taking place soon. Mars and Earth are currently in positions that favor such travel, permitting shorter travel time and less fuel use. The positioning happens about every two years.

The United Arab Emirates spacecraft is named Amal, which is an Arabic word for hope. It is set to leave from Japan on Friday.

The spacecraft, built in partnership with the University of Colorado Boulder, will arrive at Mars in the year that the UAE marks the 50th anniversary of its founding.

Omran Sharif is the project manager for the launch. "The UAE wants to send a strong message to the Arab youth," he said. "The message here is that if the UAE can reach Mars in less than 50 years, then you can do much more."

Controlled from Dubai, the spaceship – a kind of weather station – will study the upper atmosphere of Mars and follow changes in its climate.

China will launch a rover and an orbiter sometime around July 23. Chinese officials have not released much information about the operation, which is called Tianwen, or Questions for Heaven.

NASA plans to launch on July 30 from Cape Canaveral, Florida. Perseverance, the NASA spaceship, will land in Jezero Crater, the site of an ancient river and lake. The area is full of large rocks, cliffs and sand dunes – all possible threats to Perseverance.

New technology will help keep the craft away from such dangers. Ground controllers will not be able to help because it takes ten minutes for radio signals to travel between Earth and Mars.

But Jezero Crater is worth the risks, scientists say. About 3.5 billion years ago, the area had a lot of water, they say, and maybe some living organisms. Perseverance will look for rocks that show signs of past life in the area.

The NASA operation will also test some of the technology that will be needed to send humans to the red planet -- and bring them home safely.

Farley said that it might seem strange for him to call the operation low risk because it took a lot hard work and costed billions of dollars. But, he noted, "if something goes wrong" everyone will be glad the operation did not involve astronauts.

Marcia Dunn reported on this story for the Associated Press. John Russell adapted it for Learning English. Caty Weaver was the editor.

orbiter – n. a vehicle or device that travels around a planet or moon in space